MS Dhoni, who visited the BIC for the first time rued his delayed visit to the circuit. 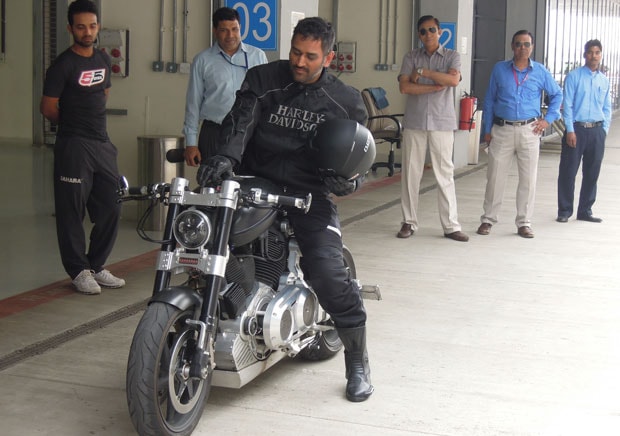 Dhoni rode his 'X132 Hellcat' bike, which he bought last year, on the 5.14km long circuit. The Indian captain is known for his passion for high-speed mean machines and even owns a team in FIM Supersport World Championship.

Batting legend Sachin Tendulkar, who had waved the chequered flag during the inaugural Indian Grand Prix in 2011 (in file pic), took a taxi ride as a BIC official drove him around the free-flowing circuit and also drove a sports car.

Dhoni, who visited the BIC for the first time rued his delayed visit to the circuit.

"It was an amazing experience. I think I am a bit late to come here. But surely I will come during the Super Sports series. Driving Hellcat was good but will bring a sports bike next time around," Dhoni said.

Kohli was also delighted as he said, "It was one of the best experiences. I have never driven so fast."

The Indian team on Sunday completed a historic 4-0 clean sweep over Australia by recording a six-wicket win in the fourth and final Test at the Feroz Shah Kotla stadium in New Delhi.

Comments
Topics mentioned in this article
Cricket Australia Cricket Team Sachin Ramesh Tendulkar India Cricket Team Shane Watson MS Dhoni Ajinkya Rahane Virat Kohli Pragyan Ojha Buddh Circuit India vs Australia 2013
Get the latest updates on SA vs IND 2021-22, check out the Schedule and Live Score . Like us on Facebook or follow us on Twitter for more sports updates. You can also download the NDTV Cricket app for Android or iOS.