Dhawan has been a prolific name in the domestic circuit. He will now be a force to reckon with after an 85-ball century vs Australia. 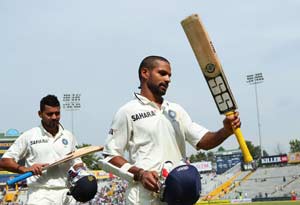 Shikhar Dhawan raced to the fastest -ever Test century on debut, against Australia. Those who know him though may not be completely surprised by his energetic performances. Here is the top-6 facts about the Delhi batsman:

* The 27-year-old is part of an attacking Delhi top-order which includes the likes of Virender Sehwag, Gautam Gambhir and Virat Kohli.

* Has 16 centuries and as many as 24 fifties in first-class cricket. Is a seasoned campaigner in domestic cricket and can flay the opposition at will.

* In the previous edition of the Indian Premier League, he was the third-highest run-getter with 569 runs for Deccan Chargers.

* Despite his massive reputation in IPL and domestic cricket, Dhawan scored a duck on ODI debut. Averages 13.80 from 5 matches played.

Shikhar Dhawan announced his arrival on the Test arena with a breathtaking unbeaten 168-ball 185 during which a number of records fell by the wayside.

En route his unbeaten 185 in the third cricket Test against Australia, Dhawan scored the fastest hundred on debut in the 136 years of Test history.

Dhawan reached the milestone in only 85 balls surpassing West Indian Dwayne Smith's debut Test ton hit in 93 balls against South Africa back in 2004. England's Matt Prior hit a century on debut against West Indies off 105 balls.

However, Dhawan missed out on the record of fastest Test hundred by an Indian which is held by Kapil Dev, who scored a century off 74 balls. The fastest ever Test hundred record is held by Viv Richards, who smashed a ton in 56 balls.

Dhawan also became the first Indian opener to score a century on debut pipping the earlier record held by K C Ibrahim, who made 85 on debut against West Indies at the Feroze Shah Kotla way back in 1948.

Dhawan is also in line to become the fastest double centurion on debut as he is only 15 runs short of 200 and has played only 168 balls so far. His strike-rate is the best ever by a Test debutant.

Among the highest scores by Test debutants, Dhawan is currently sixth in the list led by R E Foster of England. Foster scored a majestic 287 against Australia in an Ashes Test match way back in 1903.

Kuruppu's double hundred was the slowest as it took him 777 minutes (two minutes less than 13 hours).

Comments
Topics mentioned in this article
Cricket Australia Cricket Team India Cricket Team Shikhar Dhawan India vs Australia 2013
Get the latest updates on ICC T20 Worldcup 2022 and CWG 2022 check out the Schedule, Live Score and Medals Tally. Like us on Facebook or follow us on Twitter for more sports updates. You can also download the NDTV Cricket app for Android or iOS.