After the send-off, Dar, who was standing at square leg, cautioned Jadeja. Dar called Tendulkar, who in return spoke to Jadeja. 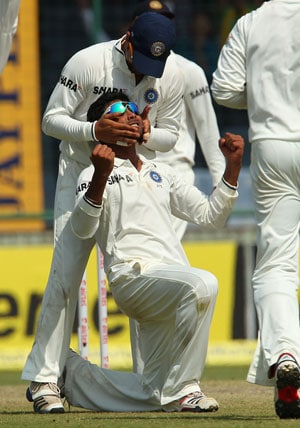 Left-arm spinner Ravindra Jadeja and pacer Ishant Sharma were today warned by umpire Aleem Dar for wildly celebrating the dismissals of Australian batsmen during the third day's play of the fourth and final cricket Test on Sunday.

While Jadeja was warned for his over-the-top celebration after dismissing Australian opener David Warner, Ishant was cautioned for giving James Pattinson a send off after disturbing his timbers at the Feroze Shah Kotla stadium.

In both the cases, Pakistani umpire Dar had a word with India skipper Mahendra Singh Dhoni.

Jadeja had started celebrating the Warner's dismissal after trapping him plumb in front of the wickets even before the umpire had raised his finger during Australia's second innings, which folded up for 164.

The incident happened in the seventh over bowled by Jadeja when he showed Warner his way back to the pavilion to which Dar, who was standing at the square leg, took exception.

Dar then called Sachin Tendulkar, who in return spoke to Jadeja. Later on, the umpire had a brief chat with Dhoni too.

Jadeja was involved in a verbal spat with Warner yesterday during India's first innings when he had shown the handle of his bat to the Aussie opener.

Both the captains, Mahendra Singh Dhoni and Shane Watson, had to intervene to stop the verbal dual.

In Ishant's case, the Indian pacer could not keep a check on his emotions as he pointed the pavilion to Pattinson after dismissing him in the 45th over with the visitors' at 157 for nine.

Ishant pointed towards the pavilion in an aggressive manner which prompted Dar to call upon Dhoni and had a word with him. Later, Tendulkar was also seen chatting with Ishant.

Dar was then seen discussing the incident with other on-field umpire, England's Richard Kattleborough.