MS Dhoni has already achieved what Ganguly never managed - a win in South Africa and New Zealand - but still has to prove his worth in Australia and England. 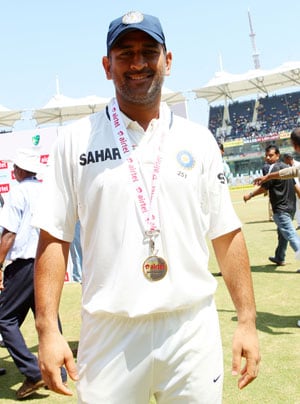 With India's massive victory over Australia in Hyderabad, Mahendra Singh Dhoni surpassed Sourav Ganguly's record to be the most successful Test captain in India's cricket history.

It was Dhoni's 22nd win in 45 Tests as captain, a remarkable winning percentage of nearly 50, and it put in the shade Sourav Ganguly's achievement of 21 victories from 49 Tests. Already India's most successful captain across all formats, Dhoni's latest feat comes after he had previously led the team to title triumphs at the World Twenty20 in South Africa in 2007, and in the 50-over World Cup in India in 2011. There was also the No. 1 ranking in Test cricket, which India held between December 2009 and August 2011.

MS Dhoni's achievement is also worth notice because his 22 wins have come in 45 matches while Ganguly captained India in 49 Tests. What differs Dhoni from Ganguly is the fact that Ganguly had more wins outside of India but the former has more time on his hands now, it seems.

Also, Dhoni has already achieved what Ganguly never managed - a win in South Africa and New Zealand - but still has to prove his worth in Australia and England.

Of the other successful captains who have led India, no one comes close enough to these two. Rahul Dravid won India 8 matches in the 25 he led, Mohammad Azharuddin won 14 in 47 while great MAK Pataudi won 9 in 40.

By any account, it has been a remarkable cricketing journey for Dhoni, from the relative cricketing backwater that is Ranchi, and it's taken him just a little over eight years to stack up all these accomplishments.

Typically, though, Dhoni sought to downplay this latest feat, merely saying, "I think it's overrated and hyped. If you see our dressing room right now, we are not bothered about who has won how many matches. What's important is to win Test matches. The more consistent we become, the better it is for the side. I don't think this number really matters for us. What's important is that we have done really well in the last two matches."

It hasn't been smooth sailing for Dhoni in recent times. In December last year, question marks were being raised over whether he was best suited for the job after he had overseen three defeats in five Test series, including one at home. Dhoni was at the helm when India were routed 4-0 in England in 2011, and while he missed the Perth Test due to suspension, he was also the captain for the tour of Australia when India were whitewashed in a four-match series which ended in January 2012. Things hit rock bottom when India were beaten 2-1 by England late last year, their first series loss to the Englishmen on home soil since 1984-85.

Dhoni acknowledged that the drubbings in England and then Australia took a toll. "It becomes tough. You start questioning yourself, which happens with each and every individual," he said. "The reason is because all of us are human beings and the only ones who can say I don't get bothered are the ones who lie really well. When you go through a tough situation, it's bound to happen that you will feel pressure. At the end of the day, you are representing your country and you want to do well. The situation or scenario is not working for you - these things start to affect you.

"It's important to be focused and get rid of any extra negative thoughts that can creep in. It's important when you are going in to bat or bowl that you do well in the first overs, then a sense of comfort comes in. That's what is important as human beings; the only reason we are so developed is curiosity and that emotional connect. We all feel it."

Dhoni's personal form too had been suspect during that period, further adding fuel to the 'make Virat Kohli captain' debate. But the selectors stuck by him and gradually, Dhoni has turned things around. He made a patient 99 in the final Test against England in Nagpur and has since been on fire across all formats, capping off his wonderful batting run with a career-best, awe-inspiring 224 in the first Test against Australia in Chennai last week.

(With inputs from Wisden India)