MS Dhoni and a team of his own

Dhoni acknowledged that he has had to change his own approach to captaincy, largely in deference to the changed personnel within the team set-up. 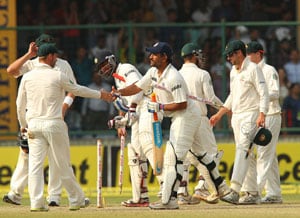 As Cheteshwar Pujara scored his third boundary in as many deliveries off James Pattinson to take India to within a run of an unprecedented 4-0 sweep, Mahendra Singh Dhoni gestured to the dressing room, asking for his 'hitting bat' to be brought out. He then had a word with Pujara, perhaps telling him to block the last two deliveries of the over, ostensibly because he himself wanted to finish things off with a flourish.

Nathan Lyon's first delivery of the next over was not in Dhoni's hitting arc, but the second was clubbed over midwicket to herald India's six-wicket victory in the final Test at the Feroz Shah Kotla. Typically, there were no histrionics or over-the-top celebrations from Dhoni, who calmly watched the ball race away to the boundary before allowing Pujara to sink into his arms. A stump was collected and tucked under his arm as a souvenir, the customary handshakes with the opposition and the umpires was gone through, and Dhoni then strode off the park, his face inscrutably blank as it normally is.

In time to come, this winning stroke will be played and replayed on television over and over again, much like the monster six off Nuwan Kulasekara over long-on that brought India the 2011 World Cup. Dhoni would perhaps have enjoyed the Mumbai six more than the Kotla four, but there is no disputing the fact that the winning runs in Kotla would have given him as much joy as those at the Wankhede Stadium.

From the highs of the World Cup victory - in a week's time, it will be two years since that memorable April 2 night - Dhoni and India's world came crashing down through consecutive overseas wipeouts in England and Australia, followed by a disastrous 2-1 defeat to England in their own backyard. To pull himself and his team out of that rut, particularly with a young batting unit and after losing all four tosses, must rank as one of the principal highlights of Dhoni's captaincy career.

It was Dhoni himself who triggered the revival with a simply phenomenal double hundred in Chennai. The match, and perhaps the series itself, was in the balance when he walked out to bat as India set off in pursuit of Australia's 380 in the first Test. By the time he was finished, Australia were left shell-shocked, having been subjected to a brutal assault that would have knocked the stuffing out of even a more formidable team than this current Aussie outfit, limp, timid and completely at sea against the turning ball.

For the first part of his captaincy career, Dhoni was undemonstrative and undemanding. That was understandable, because he had at his disposal resources that would have been the envy of any skipper. But today, there is no Dravid, Laxman, Sehwag or Gambhir; there is, too, no Zaheer and Harbhajan is no more than a pale shadow of his former self. Dhoni the skipper had to metamorphose into Dhoni the leader. The progression has made for fascinating viewing.

On Saturday, when it became increasingly apparent that Sunday could end up being the final day of the Test, Dhoni insisted that, come what may, he wanted Pujara to open the batting in the Indian second innings. Pujara had taken a crunching blow to his right index finger from James Pattinson, an injury that prevented him from fielding in Australia's second innings, but when it was India's turn to chase, he was ready alongside Murali Vijay at the top of the tree, coming up with an outstanding unbeaten 82 that made a tricky chase appear a walk in the park. Whether Dhoni could have demanded of, and convinced, Sehwag or Gambhir to take an injection, brave a fracture and bat on like he did Pujara is anybody's guess. The fact remains that Dhoni is more at ease making demands of the younger lot than he ever was of the seniors in the side, even when he was well on his way to becoming the country's most successful captain.

Dhoni acknowledged that, particularly in this series, he has had to change his own approach to captaincy, largely in deference to the changed personnel within the team set-up. "I had to change a bit, the reason being the line-up has almost entirely changed," he conceded. "The bowling attack is quite the same, but the batting line-up has changed a lot, almost completely. That means you have to tell the youngsters what needs to be done, what went wrong and all those things. When you have experienced cricketers in the side, more often than not they know what really went wrong, so you don't have to be vocal. But what's important with the new side is that you often have to talk to them, keep telling them what needs to be done, what are the faults. All those small things that really matter.

"When it comes to operating on the field, nothing much has really changed. But I felt that with this young side, it's important to get them into a system where they do things that are supposed to be done. The habits they get used to right now are what they'll go ahead with. I may not be there in two, three, four years' time. But all these cricketers, they will be around for eight to 10 years. It's important that they start off with good habits and continue with them, so when the newer generation comes under them, they also just go ahead with the good habits."

Spoken like a statesman that Dhoni has never laid claim to being, but then again, Dhoni has been his own man. He has a unique and interesting way of looking at things, as was evidenced by his take on the on-field skirmishes on Saturday, when the Indians and the Australians had a real go at each other.

"The schoolboys just graduated into college for a while," he said. "The good thing is that it was handled really well by the umpires and the match referee. One thing I always tell the match referee is that whichever team starts it, I think the other team has an equal right to give it back to them - and then you should stop it, saying 'No more, now both the sides need to be disciplined'. I say that because if you stop one side from saying a few things that need to be said at that point of time, the individuals in that side just keep it inside, keep it inside. And at some point, they just blow it out on the opposition. That's the time when people get fined and disciplinary action gets taken. I was very happy with the way it was handled. And after that, I think the teams responded very well. A bit of chit-chat is still fine, I feel."

You wouldn't hear an Anil Kumble or a Rahul Dravid come up with something like that. But then again, as we have already established, Dhoni is his own man, and finally, he has his team to work with. Even more interesting times ahead, surely.

Comments
Topics mentioned in this article
Cricket Australia Cricket Team India Cricket Team MS Dhoni Ravindra Jadeja Cheteshwar Pujara India vs Australia 2013
Get the latest updates on Fifa Worldcup 2022 and check out  Fifa World Cup Schedule, Stats and Live Cricket Score. Like us on Facebook or follow us on Twitter for more sports updates. You can also download the NDTV Cricket app for Android or iOS.