It will be a challenge for us to regroup: Shane Watson

Watson, who captained his side for the first time in Delhi, cited batting failures for the 4-0 defeat and did not spare himself from the blame. 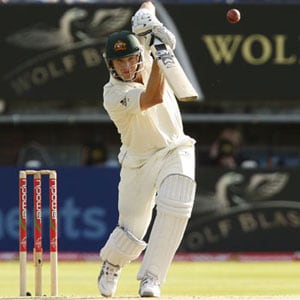 The demoralising whitewash at the hands of India seems to have shaken the Australian team to the core as stand-in captain Shane Watson said it will be a big challenge for them to recover from the reversal.

"The 0-4 margin has been extremely disappointing for us," Watson told reporters at the post-match press conference.

"We came here with high hopes of winning the series but haven't been able to get the desired results. We haven't played our best cricket. It's been a big challenge for Australia to continue to improve and learn very quickly from this defeat," he said.

Watson cited batting failures for the disappointing result and did not spare himself from the blame.

"I haven't scored enough runs. I needed to score more runs but it was disappointing. I have played a lot of cricket here in India during the IPL and had knowledge of the conditions but I failed to score runs myself.

"The top-order did not score enough runs. We haven't performed as a batting unit. Our efforts weren't good enough. I personally take the blame as a leader for not scoring runs."

Talking about the 'homework-gate' episode, which led to his axing and three other players for the Mohali Test, Watson said all of them have moved on from that episode.

"It was rocky for a day but then things got better. Obviously, I wasn't happy with the decision but then we all sat down, had a great chat.

"I went home for few days for the birth of my child. We have moved on as a team. It's been amazing to see the whole team coming together and playing as a united group," he said.

Talking about the Kotla pitch, where some balls kept low while some were shooting off, Watson said they derived satisfaction from the fact that even Sachin Tendulkar found the going tough on this track.

"The condition was challenging out there. Even one of the greatest players who have played the game, Sachin Tendulkar struggled out there on this challenging track. I think it would give few of our batsmen some encouragement.

"There was no doubt that conditions here in India were tough. They were different to those in Australia. The way the wicket behaved in this game was certainly a huge challenge for batsmen. We struggled against their high-quality spinners and even they struggled against our spinners," he added.

Watson said a target of 155 runs was good enough on this track but Cheteshwar Pujara took the game away from them.

"We were definitely in the game, a total of 150-plus. We were very close when we got few quick wickets. Pujara batted really well throughout the series. He anchored his knock nicely in the second innings. With 20 runs still to go, there was a chance for us; the wicket was doing a hell of a lot.

"We could have made things difficult for them, but Pujara batted impressively. He was unbelievable and impressive throughout the series. He is one of the most impressive batsmen in the Indian team," he added.

Watson said he has failed to perform as a specialist batsman but will soon return to his all-rounder role.

"It has been a plan for last 2-3 months not to bowl. We have a lot of cricket ahead and coming here as a specialist batsman hasn't worked out anywhere near my imagination. I haven't scored runs anywhere near what I wanted to score. It did not work as a plan personally. I am an all-rounder and I do love being an all-rounder," he concluded.

Comments
Topics mentioned in this article
Cricket Australia Cricket Team India Cricket Team Shane Watson Sreesanth India vs Australia 2013
Get the latest updates on ICC T20 Worldcup 2022 and CWG 2022 check out the Schedule, Live Score and Medals Tally. Like us on Facebook or follow us on Twitter for more sports updates. You can also download the NDTV Cricket app for Android or iOS.