Hyderabad Blues: Cricket in the time of terror

If anyone wanted to reassurance that Test cricket is alive and kicking, the first two day were examples of that. On the first day, the official attendance during tea-time was 29,435 in a stadium with 34,000 capacity. 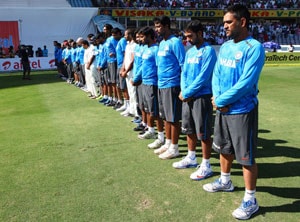 May be it was the tension with regards to the security arrangements that got the better of the Hyderabad Cricket Association (HCA) which made a faux pas at the start of the second Test between India and Australia.

The local association forgot to pay tribute to victims of the bomb blast at Dilsukhnagar at the beginning of the match. Having realised their mistake, a two-minute silence was observed on the second day by the players of both teams.

"There was a lack of coordination because we were so stressed to ensure that all security arrangements were foolproof," admitted former Hyderabad opener and senior official Dr M V Sridhar.

A BCCI official remarked that players were "even ready on the first day as it should have been the case. But it was the prerogative of the local association."

In the end, it was the case of better late than never.

Bomb blast hasn't been able to dampen the spirit of the Hyderabadis who came in large number during the first two days.

If anyone wanted to reassurance that Test cricket is alive and kicking, the first two day were examples of that. On the first day, the official attendance during tea-time was 29,435 in a stadium with 34,000 capacity. 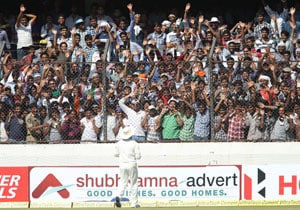 On Sunday, it was 26,071 at lunch. During the first two Tests played at this venue against New Zealand, the attendance barely reached double figures.

Considering that the All India board exams (CBSE) are on, this is a big turn-out and proof that to save Test matches, one needs to have atleast two among first three days in the weekend.

VVS Laxman always loved to caress the ball to the boundary but he wants his six-year-old son Sarvajeeth to "hit the ball as hard as possible."

"During our backyard cricket, I always tell my son to hit it hard and forget about everything else. I hate young kids being coached excessively and stuffed with information. The basic thing is to hit the ball.

"The wrist position, elbow position and these things can be taught much later. My nephew, who is seven now asks me to check his 'elbow position' during drive. I wish the fun element shouldn't be taken away from kids," Laxman was heard saying during a recent book release.