How to battle spin will torment Aussie minds 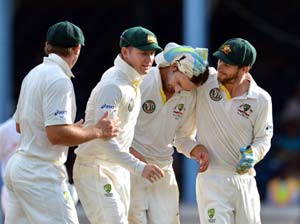 Sourav Ganguly has called India versus Australia the best modern day cricket rivalry and so has Steve Waugh. When the rivalry is the best, one can surely expect to see some of the very best turn up to turn-around India's Test fortunes.

It didn't matter whether Harbhajan Singh has got back his mojo or not. The fact that he's India's most successful bowler against the Aussies couldn't be discounted for. So the Sardar was been included in MS Dhoni's arsenal.

However, the Turbanator did not wait to get picked in the side to make a series prediction. A week back he spoke of whipping the Aussies 4-0. Surely, he'll have to raise the bar if India are to strike a telling the blow on the opposition. And it is not just Harbhajan, experts Down Under too feel that spin could be Australia's Achilles heel in India in the Test series starting February 22.

Michael Clarke, the best player of spin bowling in the tourists' line up was in sublime form when India clashed with Australia Down Under, last summer. His Man of the Series performance was crucial to the 4-0 drubbing the Indians got at the hands of the Aussies.

But the Aussie skipper does know that in the sub-continent, the equation is very different. Australia have won just 3 of 13 Tests in India since 2001, which is just a 23 per cent win as opposed to their overall win percentage of 63.5 per cent in that period.

And the biggest stumbling block for the Aussies has been India's spin strength -- 299 of 398 or nearly 75 per cent Australian wickets between 2001 and 2010 have been picked up by the spinners!

It's no surprise then that Michael Clarke is preparing his teammates to play the wily Indian spin troika of Harbhajan, Ravichandran Ashwin and Pragyan Ojha.

Phil Hughes, who is on his first Test tour of India, says, "It will be challenging to play spin in India. Clarke is very good at it and experienced, too. We are talking to Clarke about playing spin here".

The rookies and even the experienced in the side are looking to the skipper for advice on playing spin. Given the weakness of the Aussies against left arm orthodox bowlers, India will mark out a course for the men from Down Under.

And it is not just the Aussie ability to play spin that has a question mark over it but the visitors' spin attack is quite toothless. As many as five different spinners have debuted for Australia since Shane Warne's retirement, but no one has become a potent wicket taker.

Nathan Lyon, 19-Test old, has been the most successful of the pack and he will lead the spin attack against India this time while Xavier Doherty and all-rounder Glenn Maxwell serve as the second line.

Lack of quality tweakers in the pool have forced the selectors to go with a hit-man squad of five express fast bowlers. Perhaps they will be hoping to reverse their fortunes in India by reversing the ball like James Anderson did for England in the last series.

However it was England's spin duo of Graeme Swann and Monty Panesar who did the most damage. The duo took 37 wickets and destroyed the confidence of the Indian batsmen.

Not having spinners of the class of the English tweakers could be Australia's Achilles heel. But to get the better of the visiting Aussies, the Indians will have to get over the psychological blow the English dealt to them this winter.