Has Sachin Tendulkar played his last international match in India?

Exactly a month from Sunday, Tendulkar will turn 40. There is little doubt that his reflexes have slowed in the last couple of years. 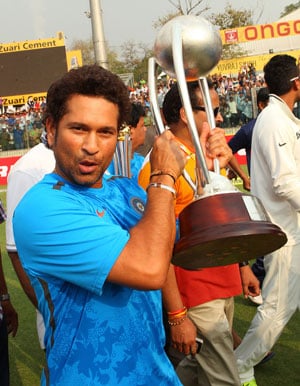 There was a certain buzz as Sachin Tendulkar walked to the wicket on a Sunday afternoon; nobody was saying it loudly but on the minds of thousands of adoring fans there was a question - has the batting maestro played his last international match in India?

For 24 years over 198 Tests, 463 ODIs and a single T20 match, every time he has come out to bat or made his way back to the pavilion he has been cheered in virtually every single cricket ground in the world. Therefore, the applause he got on Sunday in the final moments of the final Test against Australia was not unusual.

But there was little doubt that the day was different as the diminutive Master-Blaster emerged from the pavilion, turned his head to look into the sun and slowly made his way to the wicket with India needing 32 runs for a historic 4-0 sweep against Australia. Was it his last Test innings on the Indian soil?

Many would have hoped that he would hit the winning runs. But that was not to be as Tendulkar lasted only five balls, falling leg before to Nathan Lyon for one run.

A hush fell on the ground but as he made his lonely walk back to the dressing room the crowd suddenly was on its feet and cheered him again.

Exactly a month from Sunday, Tendulkar will turn 40. There is little doubt that his reflexes have slowed in the last couple of years. There have been too many failures against fast bowlers in England and Australia and even against spinners at home by the lofty standards he has set for himself.

There are flashes of brilliance as in the first Test against Australia at Chennai last month when he played a solid knock of 81. But he has never gone past 50 subsequently and his average for the series is 32.

Given India's cricket calendar, the next home Test will be in mid-2014 when Tendulkar would be past 41. Prior to that the Indian team is scheduled to travel to South Africa this December followed by a tour of New Zealand in early 2014.

He would probably be in the team for these overseas tours because many believe that he lends a solidity to a team that has lost some of its great players in recent months, Rahul Dravid, VVS Laxman and in all probability Virender Sehwag.

But cricket pundits reckon that it is highly unlikely that we will see Sachin play an international match in India again.

Pakistan's fast bowling great Wasim Akram said it's difficult to know Tendulkar's mind though he felt the Kotla Test could be the veteran batsman's last match on home soil.

"It looks like he has played his last Test on home soil. But it is tough to say anything about Tendulkar. It's difficult to say what he thinks and what is on his mind. You cannot speculate anything about him," Akram said.

Former India captain Dilip Vengsarkar said it's for Tendulkar to decide on whether he is available when India next play on home soil or not.

"He (Tendulkar) is the greatest player India has produced. I don't want to comment on somebody's personal career. He's the best person to judge his future. It's for him to decide whether he's available when we next play on Indian soil," said Vengsarkar.

India's 1983 World Cup-winning captain Kapil Dev refused to speculate on the issue, saying that it's for the selectors or Tendulkar to decide.

"He might play for the next three years or maybe more. It is up to the selectors for one series or more and it is upto Sachin to take the call. As far as we are concerned we will continue to admire whatever Sachin does on the 22-yard strip," said Kapil.

India's tour of South Africa in December would be a real test of character for the players and former captain Sourav Ganguly felt that the team would need Tendulkar's experience there.

"Selectors are probably giving Sachin Tendulkar an 'extension' keeping his 200th Test milestone in mind. It would have not been the case had it been someone else. India would look forward to his experience on South Africa tour. His top form would be quite crucial in South African conditions," he said.

"Going by the schedule, it is obvious for anybody to guess it is the last Test match for Sachin in India. But entirely it is up to the selectors and Tendulkar to take the call to play more Test matches or not.

"I would advise millions of Sachin's fans to watch closely the maestro in live action in the IPL, where he represents the Mumbai Indians. Perhaps this is the only time Indian fans could watch Sachin play live," said Prasanna.

"Considering the schedule, we do not have home matches in the next two years, therefore it could be considered that Sachin has played his last match in India," Raman said.

Giving a cautious response on the issue, former batsman and chairman of selectors Chandu Borde said, "It's a million dollar question. It's difficult to predict when it's Tendulkar. You never know... Retirement is a decision best left to him. I'm sure he will take an intelligent decision.

Lalchand Rajput, former India coach and opener, said Tendulkar may take a call on whether to play on home soil or not after the Test series in South Africa.

"I think he will take a call after the tour of South Africa. India needs the experience of Tendulkar on that tough tour. India would need a good blend of experienced players and younger ones on that important tour," he said.

Comments
Topics mentioned in this article
Cricket India Cricket Team Australia Cricket Team Sachin Ramesh Tendulkar Nathan Lyon India vs Australia 2013
Get the latest updates on SA vs IND 2021-22, check out the Schedule and Live Score . Like us on Facebook or follow us on Twitter for more sports updates. You can also download the NDTV Cricket app for Android or iOS.