Harbhajan Singh 'nervous yet excited' to complete a century of Tests

Asked how he kept himself motivated during the tough times, especially after being dropped from the team, Harbhajan said the desire to be a part of the squad kept him going. Some of his most significant milestones have come against Australia but Harbhajan said he doesn't quite understand the connection with the team from Down Under. 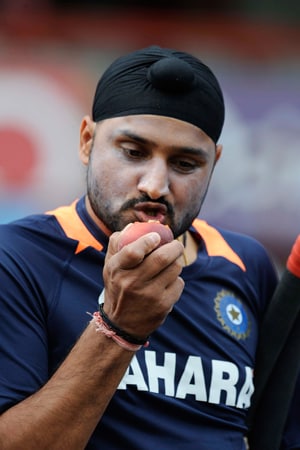 Set to complete a century of Test appearances, veteran Indian off-spinner Harbhajan Singh on Thursday said that he is a "bit nervous" going into the first Test against Australia starting on Friday.

With 408 wickets from 99 Tests at an average of 32.27 and a strike-rate of 68.1, Harbhajan has been one of India's most prolific bowlers even though he has been enduring a tough phase for some time.

The off-spinner will become only the 10th Indian cricketer to achieve the milestone after it was confirmed that he will be in the playing eleven for the series opener.

"It's a big game," Harbhajan, who interestingly found fame after wrecking the same team in the famous 2001 series, said at the pre-match press conference here.

"(The previous) 99 are gone. Obviously a bit nervous but I am sure I will be fine. I have faced these situations before," the 32-year-old spinner added.

Talking about the milestone, Harbhajan said the next target would be to add another 50 Tests to his CV.

"I have gone through times when I was not doing well or when I was doing well and got too excited. These things happen. Bit nervous to start with, but I will be fine.

"Once I get away with 100, we will see what needs to be done to play another 50-odd. Probably I will have to work even harder," he said.

Reflecting on a career which has had its share of highs and lows, Harbhajan said he has learnt never to give up through the journey.

"It's been a journey with lots of ups and downs. No one can always be at the top and no one will be always down... You will have ups and down, like normal guys, doing routine things," Harbhajan said.

"What I've learnt from great players is to never give up. These guys have done so well for India, made themselves great cricketers and ambassadors for the game. They had one thing in common - never give up. That made this team successful. They showed us how to work hard.

"They made us believe we can win anywhere, from any situation. I'm very lucky, very proud that I've played with all these greats like Sourav Ganguly, Rahul Dravid...I repeat their names because without their support I wouldn't have achieved this," he added.

Asked how he kept himself motivated during the tough times, especially after being dropped from the team, Harbhajan said the desire to be a part of the squad kept him going.

"Playing for India itself is a big motivation. When you're not playing, that's what motivates you...that I should be there playing for India, I should work hard for the team and get there.

"It comes to individuals, if you want to work hard at that stage, or you want to just sit back and say I've played...it's fine whether I get picked up for India or not. But I want to play for India and that's the only thing I wanted," he said.

"I really worked hard whatever time I was out. I wanted to come back and do well for the team. If you're willing to work hard, God will help you. I've always believed. I was trying to stick to this - work hard, have faith in God, and you'll get the chances, opportunities," he added.

Some of his most significant milestones have come against Australia but Harbhajan said he doesn't quite understand the connection with the team from Down Under.

"I don't know if I have a special connection with Australia, but it's nice to see your name alongside with greats like Sachin Tendulkar, Sunny Gavaskar, and all the greats who have played for India in 100 Test matches," Harbhajan said.

"It's a big moment. I remember playing my first game under (Mohd) Azharuddin's captaincy. It was in Bangalore, I was 17 and I had no clue about what was going to happen. I was just a little kid in the park, I was star struck by looking at these players. I was playing alongside Tendulkar, (Javagal) Srinath, (Anil) Kumble... These were my heroes. It was a great moment. 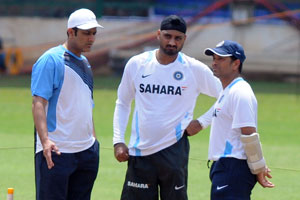 Harbhajan said he never thought he would play this long for India.

"...I never thought I'd play for India for this long and play 100 Test matches. God had been really kind. I would like to thank the Almighty for giving me this opportunity. And of course a big thanks to my teammates and great seniors like Tendulkar, Kumble, Srinath, Rahul Dravid, Laxman.

"These guys have been fantastic. I don't know if I'd have achieved this without their support. I thank each and every one who stood by me and supported me. I'm just going to go out and enjoy this big match tomorrow and hopefully I'll do well," he said.

When queried about the 2001 series against Australia in which he took 32 wickets, Harbhajan said that feat is behind him now.

"That was a long way back, I can't keep on thinking about that again and again hoping I'll repeat that. That kind of a series happens once in a lifetime, when everything clicks," he said.

"All I can say is that I'll put in more effort than I put in then, and hope for the results me and the team wants. Whether it's 32 wickets or 23 wickets, I'll look to the bowl well for the team, and the results will follow."

He has been relegated from the spin spearhead's role to being the third choice at times, but Harbhajan doesn't mind the transition.

"At the end of the day, you're doing things for the team, whether you're No. 3 spinner or the No. 2 spinner. I don't mind playing as the No. 4 as long as I get to do the job for the team," Harbhajan said.

On the most cherished moment of his career, Harbhajan recalled,"...against Australia in 2001, and the second moment when we became the No. 1 side in the world. That was very satisfying."

Dubbed feisty for his aggression, Harbhajan said he has become mature with age.

"I've definitely grown up, I was 17 and a half then, now I'm 32. I've mellowed down, with time you learn a few things. I've made a few mistakes earlier in my career, due to my extra aggression. Sometimes it worked, sometimes it didn't. But with time, I've learnt a lot. I look forward to being a better person," he said.

Harbhajan said combining with the legendary Anil Kumble was one of the best learning experiences for him.

"Obviously it was great to have Anil Kumble on the other side, a guy like him who's got such experience with him. One thing I've always cherished, when he was playing, he was one guy who would never give up.

"If he was bowling at the other end, 30th over, he's bowling with the same intensity. I used to think, why can't I do this? That's what pushed me. It was a little difficult without him. Of course new guys have come, they've done well. It take long time to fill his shoes, but the new guys have done well in whatever cricket they've played," he said.

Queried about the form slump of the team, Harbhajan said amends can be made for the debacles of the past few months if the team clicks in unison. He also defended his prediction of a 4-0 win for India in the series starting tomorrow.

"...if we stick too our basics, it is very hard to beat us in India though we didn't win in our last series against England and didn't play to our potential. We have been the No. 1 team in the world, that doesn't come like a dream. We've worked hard," Harbhajan said.

"These are the same guys who've taken the team to that position. Why I said we could beat them 4-0 is that if we don't believe, who will? I believe that we can do it, then we work towards it. You've got to believe in yourself to make things happen, you work towards it," he said.

Criticised quite often despite over 400 Test wickets in his kitty, Harbhajan said he does not get too affected by it.

"How do I handle, I just keep quiet. Everyone has got their opinion, but unfortunately or fortunately people who have not played to that level, if they say things like I'm not good enough to play for India, it doesn't matter," he said.

"What matters is what my teammates think of me. Those guys are going to be with you, that's what matters. Everyone has got opinions, even I've got my opinion about others, it's not that I'm right all time. You've got to live with it," he added.

Despite the relative inexperience of the visiting Australian team, Harbhajan said the Indians cannot afford to take it lightly.

"Earlier (Australian) teams, when they've come to India, I can see in their batting line up, up to No. 11, all of them were match-winners, experienced players.

"In this team, most of them have played in the IPL, but not in the longer format. The Australians come hard at you, whatever team they might have come with. You've got be there and focus on your job, rather than thinking if they're coming here for the first time," he said.

"The Australian team is always a good team to play against. I'm sure it'll be a good series," he added.

Comments
Topics mentioned in this article
Cricket Australia Cricket Team India Cricket Team Anil Kumble Sourav Ganguly Rahul Dravid Harbhajan Singh India vs Australia 2013
Get the latest updates on ICC Women's Cricket World Cup 2022 and IPL 2022, check out the Schedule , Live Score and IPL Points Table. Like us on Facebook or follow us on Twitter for more sports updates. You can also download the NDTV Cricket app for Android or iOS.