Some termed he had a casual approach, whereas others thought that he had the ability to keep things simple, Dhawan has been the topic of discussion in Delhi's cricket circle for a number of years now. 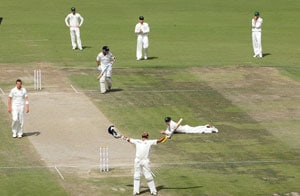 He loves twirling his moustache, sports tattoos on his bulging biceps, often comes to training riding customised Hayabusa bikes --- in a nutshell Shikhar Dhawan epitomised everything that was 'larger than life' in Delhi cricketing fraternity till Virat Kohli arrived.

The left-hander is affectionately called "Gabbar" by his Delhi teammates for his hulk like body and enormous amount of power he packs in his shots.

Normally, one finds established cricketers driving their sedans to the practice sessions but Dhawan would arrive at the Feroze Shah Kotla in his sleeveless vests and shorts riding a customised 1000cc motorbike.

One remembers, a former Delhi stalwart who had played a few ODIs for India in the early 80's stunned when Dhawan once arrived on his 'mean machine'.

"Then why didn't you buy a Mercedes?" the dumbfound ex-cricketer again asked.

Some termed he had a casual approach, whereas others thought that he had the ability to keep things simple, Dhawan has been the topic of discussion in Delhi's cricket circle for a number of years now.

The 27-year-old Dhawan first came into limelight when he scored three centuries in the U-19 World Cup in Bangladesh way back in 2004. Some of his U-19 teammates like Suresh Raina, R P Singh, Dinesh Karthik all donned the national jersey much before and it became an agonising wait for the affable man.

"We are happy that it has been a worthwhile wait," said Shrestha Dhawan, his sister.

His one-time teammate and now Delhi coach Vijay Dahiya would tell you that "one poor shot in 2010-11" Ranji season changed his approach.

"Delhi needed 136 to win against Railways with a day and 10 overs left. Shikhar played a rank bad shot and Delhi lost the match and failed to make it to the knock-out stages. He was criticised a lot. This year on a green-top at the Roshanara, Shikhar anchored a 270-run fourth innings chase with a matured knock," Dahiya stated.

Those who were present at the Roshanara on that day saw erstwhile coach Manoj Prabhakar losing his cool once Dhawan got out.

Once a regular at the Page-3 parties, Dhawan has now turned into a devoted family man post his marriage to half Bengali-half British Aesha Mukherjee.

If one had come for Delhi team's Ranji matches, one would find Mrs Dhawan arriving during post lunch session and sit quietly with a red baseball cap.

There will be days when Dhawan would give her throwdowns after day's play as she would perfect her forward defensive stroke.

His wife has two daughters from her earlier marriage and Dhawan is a proud dad.

"My elder daughter was ecstatic when she heard about my selection in the Test side," Dhawan had told then.

Post Saturday, Dhawan has ensured that he will also be remembered for having played one of the most breathtaking innings in the Indian cricket's history.

Comments
Topics mentioned in this article
Cricket Australia Cricket Team India Cricket Team Vijay Dahiya Shikhar Dhawan Suresh Raina India vs Australia 2013
Get the latest updates on SA vs IND 2021-22, check out the Schedule and Live Score . Like us on Facebook or follow us on Twitter for more sports updates. You can also download the NDTV Cricket app for Android or iOS.