Batting great Sunil Gavaskar delivered the inaugural MAK Pataudi memorial lecture on Wednesday, instituted in the memory of the former charismatic Indian captain who passed away in 2011. 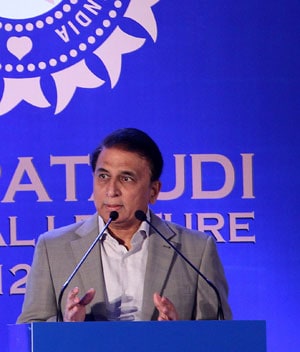 Emphasising the significance of Test cricket when the slam-bang T20 format is gaining huge popularity, former India captain Sunil Gavaskar asked the game's administrators to ensure that the longer version of the game remains the "pinnacle" of the sport.

Delivering the inaugural MAK Pataudi memorial lecture on Wednesday, instituted in the memory of the former charismatic Indian captain who passed away in 2011, Gavaskar reminded the cricket administrators their duty to ensure the survival of Test cricket.

"Test cricket is the pinnacle. That's the format through which you will be recognised. It's how you do at Test level. Out of 10 Test playing nations, four or five are major Test countries, who should ensure that Test cricket remains pinnacle," said Gavaskar with ICC CEO Dave Richardson in attendance.

"It is Test cricket which separates men from boys, I would request all administrators to look into it," the batting great said.

None of the members of Pataudi's family was present on the occasion as his wife Sharmila Tagore was indisposed.

The Indian and Australian cricket teams also attended the lecture as Gavaskar shared some interesting stories about Patuadi and his charismatic character.

Gavaskar said Pataudi liberated the Indian cricket by bringing the element of aggression in the side, which would take beating from any team hands down.

With his typical tongue-in-cheek style, Gavaskar said the a big incentive in his playing days was the chance to date glamours women from tinsel town while for today's cricketers it may be playing in the IPL.

The comment drew smiles on the faces of both Indian and Australian young cricketers, listening to Gavaskar.

Gavaskar said the the credit for the transformation in the Indian cricket goes to Pataudi.

"He liberated the Indian cricket. He changed the outlook. He charged up to the spinners, lofting the bowlers over the field. Only CK Naidu and Lala Amaranth used to do it but after them it was Pataudi. he made things happen rather than wait for things to happen," Gavaskar said.

Pataudi led the Indian team in decade of 1960s and it was under his leadership that India recorded its first away Test series win against New Zealand in 1968.

"He changed the entire mind set. Indian team was run over by any team. He gave the team the confidence that you can play against any team and win," Gavaskar said.

Gavaskar also said it was a big quandary as to how to address Pataudi. Whether to call him Nawab Sahib, Tiger, Pataudi sahib, captain or skipper and that he never could know it.

The former Test opener remembered Pataudi as a prankster, narrating how he once fooled his teammates by orchestrating a hostage drama.

Gavaskar said Pataudi asked his servants to come in the garb of dacoits when he took his teammates for a 'shikar' (hunt) and enacted the hostage drama.

He also urged the Indian and Australian cricketers to bring in 'fun' in the upcoming Test series and also asked young cricketers to celebrate feats with smiles on face rather than throwing aggressive gestures.

It apparently had refernce to the celebration-style of Virat Kohli.

Comments
Topics mentioned in this article
Cricket India Cricket Team Australia Cricket Team MS Dhoni Sreesanth Nawab of Pataudi Jr Sunil Manohar Gavaskar India vs Australia 2013
Get the latest Cricket news, check out the India cricket schedule, Cricket live score . Like us on Facebook or follow us on Twitter for more sports updates. You can also download the NDTV Cricket app for Android or iOS.