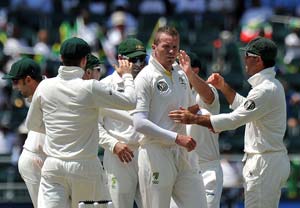 The Australian cricket team arrived in Chandigarh on Thursday afternoon for their third Test match against India, to be played at the Punjab Cricket Association (PCA) stadium from March 14.

The team, led by Michael Clarke, is trailing 0-2 in the four-match Test series having lost in Chennai by eight wickets, before the innings and 135-run humiliation in Hyderabad.

Chairman of the PCA Media Committee G S Walia, who is also the PCA Joint Secretary, said the 30-member Australian contingent, including the players and service staff, arrived here by a chartered flight from Hyderabad.

The team was taken to its hotel in sector 35 amid tight security arrangements made by the Chandigarh Police, which had deployed its personnel on the route from airport to the hotel.

Walia said the visitors have no engagements for the next two days. They are scheduled to hold the practice sessions from March 10 onward.

He said members of the Indian team will start arriving from Monday as the players will be coming straight from their respective home towns.

Comments
Topics mentioned in this article
Cricket India Cricket Team Australia Cricket Team Sector 16 Stadium, Chandigarh Bangladesh Cricket Team India vs Australia 2013
Get the latest updates on Fifa Worldcup 2022 and check out  Fifa World Cup Schedule, Stats and Live Cricket Score. Like us on Facebook or follow us on Twitter for more sports updates. You can also download the NDTV Cricket app for Android or iOS.