Australian players face media fury in the wake of debacle

Stand-in captain during the Delhi Test, Shane Watson was hit the hardest by the unforgiving Australian media after their 4-0 Test defeat in India. 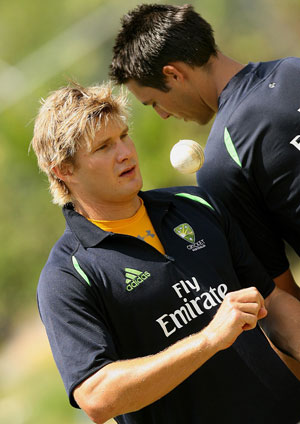 A livid Australian media on Sunday labelled their side as "worst" in 34 years and compared the shot selection of their top order batsmen to "insanity" as India inflicted a humiliating 4-0 whitewash on the visitors.

"It's official. Australian cricket's class of 2013 are the worst to tour India ... and the nation's worst Test outfit in 34 years. That is the macabre reputation Michael Clarke's battered troops will bring home," a write-up in the Telegraph read.

'Herald Sun' had some harsh assessment for the batsmen.

"They say the definition of insanity is doing the same thing over and over and expecting a different result. Unless Australia's batsmen change something - starting today - they might wake up in a mental ward before the Ashes."

"The real concern ahead of the Ashes is not so much the batting averages in India, but the wider mentality that governs the decisions, and mistakes the Australian batsmen are making," the report added.

Australian sports writers came down heavily on the top-order and stand-in captain Shane Watson was hit the hardest.

"The struggling all-rounder can no longer be a selection untouchable after his form slump hit a crisis point during Australia's latest batting collapse.

"...If any player should forensically analyse their form on this shambolic tour, it is Watson," wrote Telegraph.

"In the ultimate indictment, No.11 Nathan Lyon (244 balls) managed to survive more deliveries on this tour than Watson (239). Lyon (18) also finished with a superior batting average to Watson (16.5)," the critical piece added.

Continuing in the same vein, Sydney Morning Herald pilloried Watson the most.

"Watson, the captain in Delhi, has been the most guilty and there was more of the same on Sunday. His shot, rocking back and trying unsuccessfully to heave the left-armer Pragyan Ojha to the boundary, was not one out of the leadership handbook."

'Herald Sun' also questioned the way Australian batsmen got themselves out.

"Australia's second highest individual score in this series is 99 ... by paceman Mitchell Starc. Getting out in India is not a crime. Getting out the same way is."

"Too often on this tour Australia's top-order have come unstuck with either carbon-copy dismissals, reckless strokeplay or, worse, going against the initial plans they had in place to counter India's bowlers."

Syndey Morning Herald wrote that the only remedy for Australia's redemption seems to be the overhaul of the top order.

"When the dust settles from Australia's tour de farce, one subject should stand out above all else. Not ''Homeworkgate'', not the dynamic between Michael Clarke and Shane Watson, and not Mickey Arthur's Twitter account.

"As treacherous as conditions were against the trickery of Ravindra Jadeja on Sunday, Australia's top order was culpable for yet another collapse."

The media was worried as the Ashes series is looming large against a very formidable England.

"Watching the final-day massacre from his Sydney lounge-room, the injured Clarke must wonder how on earth Australia rebuilds for the Ashes," wrote 'Telegraph'.

Comments
Topics mentioned in this article
Cricket Australia Cricket Team India Cricket Team England Cricket Team Shane Watson Nathan Lyon India vs Australia 2013
Get the latest updates on ICC T20 Worldcup 2022 and CWG 2022 check out the Schedule, Live Score and Medals Tally. Like us on Facebook or follow us on Twitter for more sports updates. You can also download the NDTV Cricket app for Android or iOS.