A confident India will seek to extend their unbeaten run to five matches and secure a semi-final spot when they take on South Africa in the ICC Women's World Cup on Saturday. 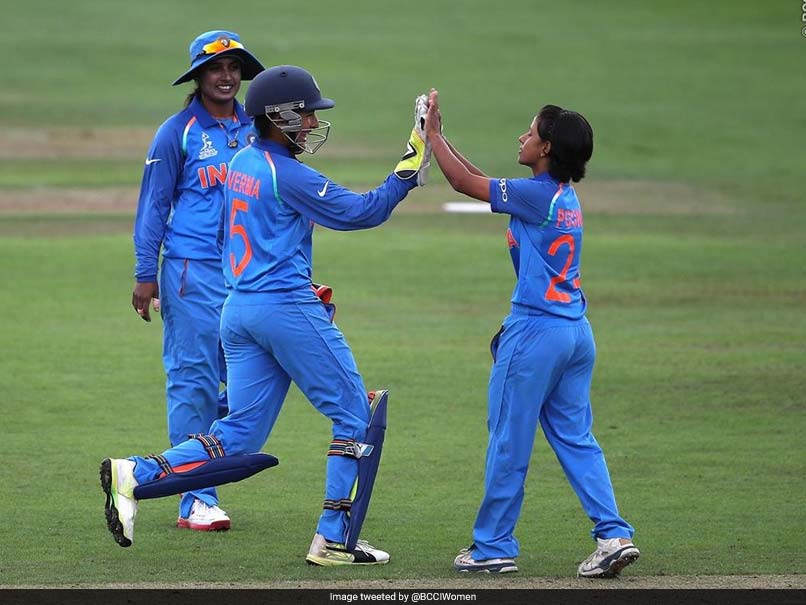 India will take on South Africa on Saturday© AFP

A confident India will seek to extend their unbeaten run to five matches and secure a semi-final spot when they take on South Africa in the ICC Women's World Cup on Saturday. India are on a rampaging run having beaten England, West Indies, Pakistan and Sri Lanka convincingly to be second in the standings behind Australia. South Africa, on the other hand, are fifth with two wins and a loss from four games with one ending in a washout.

Not only because of the good cricket they have been playing in the tournament, India will also take heart from their recent success against South Africa, whom they beat in the final of a Quadrangular series in May.

"We are quite confident for the game against South Africa because in the last four or five games we have played against them we have done well," said Veda Krishnamurthy on eve of the game.

"We are aware of their team, we know what combinations and players are there, so we can play according to our strengths. We played them a couple of months back so we know their strengths and weaknesses.

"We are more compact than them, because individually, South Africa are very good, but when it comes to collective performance, they really depend on their main players to do well," she added.

India were able to defend 232 in their previous game Sri Lanka although they looked like posting a bigger total after the launch pad provided by Deepti Sharma (78) and skipper Mithali Raj (53).

Raj has led from the front, scoring 178 runs in four games, which includes two half centuries.

The spin trio of Ekta Bisht, Poonam Yadav and Deepti Sharma have been the backbone of India's bowling, sharing 19 wickets amongst them.

They face South Africa, who are looking to bounce back from the England loss after the hosts amassed the fifth highest score in World Cup history to win by 68 runs.

But captain Dane van Niekerk believes her bowlers can reproduce the team's stunning form that saw them bowl the West Indies out for 48 at the same venue.

She said: "Our bowlers don't like getting hit like that, I am sure they will come back firing even stronger so I am excited to see what they will do in the next few days and how they are going to go about their work.

"It doesn't mean their skills have gone away in just one game, and it doesn't mean the West Indies game was a fluke. We are a good bowling side, every team in the world has had days like this.

"India are a brilliant batting side, they have a lot of spinners and they are on a high. They are playing really good cricket at the moment and they are the ones to beat."

(This story has not been edited by NDTV staff and is auto-generated from a syndicated feed.)
Comments
Topics mentioned in this article
India Women South Africa Women Mithali Raj Dane Van Niekerk Cricket ICC Women's World Cup
Get the latest updates on India vs England Series, India vs England , live score and IPL 2021 Auction . Like us on Facebook or follow us on Twitter for more sports updates. You can also download the NDTV Cricket app for Android or iOS.