ICC U-19 World Cup: After India defeated England in the final on Saturday, the BCCI also announced a cash reward for the players and support staff. 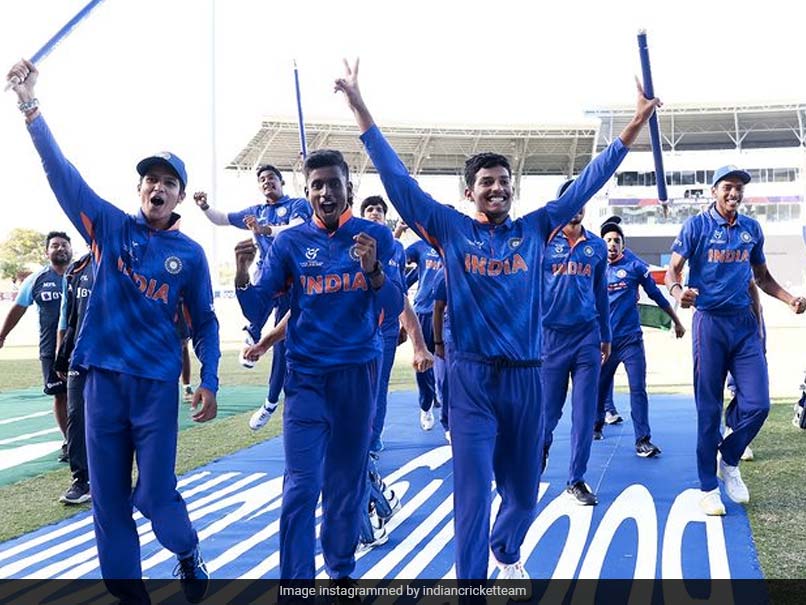 India defeated England in the U-19 World Cup final in Antigua.© Instagram

The triumphant India U-19 squad will be felicitated by the BCCI in Ahmedabad upon its arrival in India. On Sunday, the BCCI announced cash reward of Rs 40 lakh each for the squad members and Rs 25 lakh each for support staff. Following their famous win over England on Saturday, the Indian contingent called on the Indian High Commissioner to Guyana. With little time to celebrate the success in the Caribbean, the squad will take the long flight back home on Sunday evening with connecting flights from Amsterdam and Bangalore before eventually landing in Ahmedabad.

The senior Indian team is also currently in Ahmedabad playing three ODIs against the West Indies. With the team in bubble, it is not yet known if the U-19 boys will get to interact with their seniors.

"It has been a hectic schedule for the boys who have little time to rest. They will get some rest after they land in India," said a BCCI official.

Fresh from their win in the final, the boys headed to Guyana from Antigua and were felicitated by the Indian High Commissioner K J Srinivasa who is an avid cricket fan.

The players were tired but enjoyed clicking pictures with West Indies great Sir Curtly Ambrose, who was present at the function. Delhi-based Yash Dhull captained the Indian team in the Caribbean while Hrishikesh Kanitkar headed the support staff.

National Cricket Academy chief VVS Laxman was also in the Caribbean and played a massive role in taking care of the team in the wake of a COVID-19 outbreak which left five players infected including Dhull and his deputy Shaik Rasheed.

It was a record-extending fifth title for India who have made the final of the last four editions.

India U19 BCCI England Under-19 vs India Under-19, Final ICC Under 19 World Cup 2022 Cricket
Get the latest updates on ICC T20 Worldcup 2022 and CWG 2022 check out the Schedule, Live Score and Medals Tally. Like us on Facebook or follow us on Twitter for more sports updates. You can also download the NDTV Cricket app for Android or iOS.