Under-19 World Cup: From Sachin To Sehwag, Wishes Pour In For Victorious India Colts

With a fourth crown, India surpassed Australia in the race for most U-19 World Cup titles. 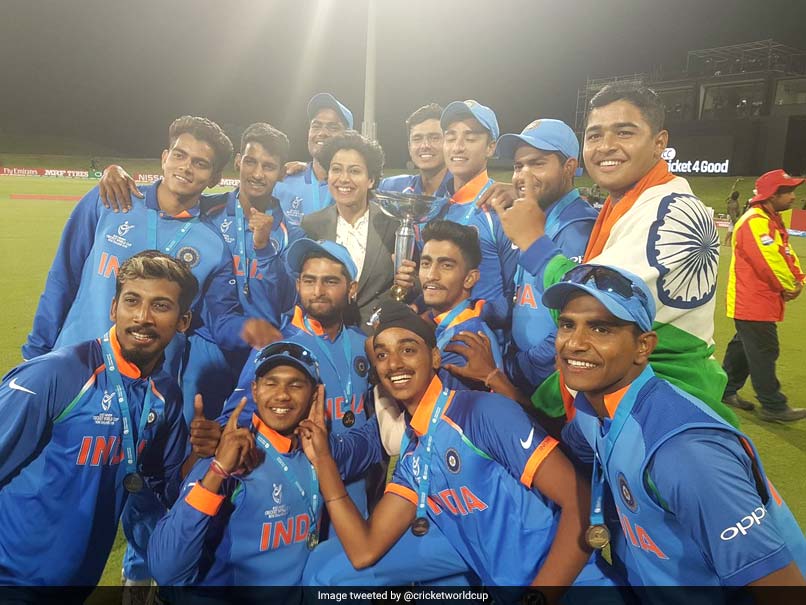 The team's performance was also a fitting tribute to coach Rahul Dravid.© ICC

Manjot Kalra emerged as the man for the big occasion, scoring a sublime 101 not out off 102 balls to guide India to their fourth Under-19 World Cup title after an eight-wicket rout of Australia in the final on Saturday. After the historic win, cricketers took to social media and applauded the Prithvi Shaw-led team's effort. Master Blaster Sachin Tendulkar posted a video message on his Twitter handle and wrote: "With great team work, big dreams work. Congratulations to our World Champions!! We are proud of you. A big congratulations to Rahul and Paras for their guidance".

WITH GREAT TEAM WORK, BIG DREAMS WORK. Congratulations to our WORLD CHAMPIONS!! We are proud of you. A big congratulations to Rahul and Paras for their guidance. #ICCU19CWC #INDvAUS pic.twitter.com/w0heorY8g6

With a fourth crown, India surpassed Australia in the race for most U-19 World Cup titles. Prior to the final, India and Australia were locked at three titles each.

Here's how other cricketers lauded the young bloods.

What a win for the U19 boys, take it as a stepping stone; Long long way to go! Enjoy the moment! ???? @BCCI #U19CWC pic.twitter.com/D8mGdakxZu

Every Indian is delighted, all credit to Rahul Dravid for committing himself to these young kids ,and a legend like him deserves to lay his hands on the WC. Only Fitting. #INDvAUS

Congratulations to the Indian team on dominating the #U19WorldCup and being the deserved champions. Everyone stood up and maintained the intensity throughout the tournament. Truly memorable win. Cherish and soak in this moment. #INDvAUS

Great work by the U-19 team to remain undefeated in the World Cup. Truly deserving winners. Your work has just begun, enjoy this moment!
A special shoutout to #RahulDravid who has continuously worked hard behind the scenes to help this team achieve its true potential. #ICCU19CWC

Congratulations to the young lads on winning #U19CWC! Fantastic performances all around. #INDvAUS

Congrats to the Indian team on winning the ICC Inder 19 World Cup, they have been ruthless and professional through the tournament. It's a proud feeling and well done ???? to the entire team and the support staff. #ICCU19CWC

The team's performance was also a fitting tribute to coach Rahul Dravid, who finally got his hands on a World Cup trophy.

Under Dravid, the side had finished runner-up in the 2016 edition in Bangladesh.

India's previous title came in Australia six years ago when the Unmukt Chand-led team beat the hosts in the final.

The Virat Kohli-led side was victorious in 2008 while Mohammed Kaif was captain when India triumphed way back in 2000.

Comments
Topics mentioned in this article
Shubman Gill Prithvi Shaw Manjot Kalra ICC Under-19 World Cup Cricket India U19 Australia U19
Get the latest updates on ICC T20 Worldcup 2022, check out the Schedule and Live Score. Like us on Facebook or follow us on Twitter for more sports updates. You can also download the NDTV Cricket app for Android or iOS.