Shaw, though, missed out on a century as he was caught behind off Will Sutherland, son of former Cricket Australia CEO James Sutherland. The Indian captain faced 100 balls and scored eight boundaries, including two sixes in his knock. 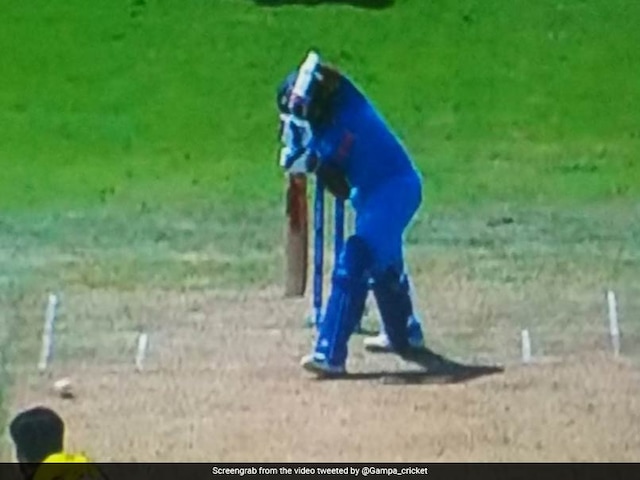 Skipper Prithvi Shaw led from the front with a 94-run knock and shared a 180-run stand with fellow opener Manjot Kalra (86), taking India to an impressive 328 for seven against Australia in their ICC Under-19 World Cup opener. Shaw, though, missed out on a century as he was caught behind off Will Sutherland, son of former Cricket Australia CEO James Sutherland. The Indian captain faced 100 balls and hit eight boundaries, including two sixes in his knock.

Some of Shaw's shots even reminded fans of the great Sachin Tendulkar. "That is Tendulkar," said Ian Bishop on commentary when Shaw played a glorious drive off the front foot.

Huge praise by Ian Bishop after this shot from Prithvi Shaw, calling it 'that is tendulkar' #U19CWC pic.twitter.com/zVkyY0knfj

Once upon a time we had Sunil Gavaskar, then came along Sachin Tendulkar, Now we have Virat Kohli while the future is bringing us this young lad Prithiv Shaw. A legendary batsman for each generation,
That straight Drive is so remincient of Sachin. #INDvsAUS #U19CWC pic.twitter.com/3tPygg4V9q

Prithvi shaw reminds so much of sachin tendulkar. Even he got dismissed on nervous nineties.#U19CWC ??

Prithvi shaw's elegance and bat flow reminds me and @OneTipOneHand_ of Sachin Tendulkar.

Great praise of Prithvi Shaw by Ian Bishop after noticing a shot 'He is Tendulkar'. This is probably the greatest honor a person can get during his cricket career. @sachin_rt @PrithviShawClub #CWCU19 #U19CWC #INDvAUS

The splendid top-order batting vindicated Shaw's decision to bat in their tournament-opener.

There was no respite for the Australian bowlers even after departure of Shaw and Kalra with Shubhman Gill tormenting the bowlers with his 63-run knock.

It was not that Shaw and Klara plundered boundaries, instead they raised their knocks with some stupendous risk-free batting.

His opening partner also missed out on a ton, falling for 86 which came off 99 balls with 12 shots to the fence and on over the ropes.

There were no steady partnerships after their departure even as Gill kept one end solid with his 54-ball knock which had six fours and a six.

The middle order batsmen lost their wickets, trying to accelerate the run-rate as Himanshu Rana (14) and Anukul Roy (6) fell cheaply.

Abhishek Sharma though managed to come up with a 8-ball 23-run cameo which propelled India past the 300-run mark. he hit two sixes and as many fours.

It was Edwards, who dismissed Rana and then later added wickets of Abhishek and Shiva Singh (10) to his tally.

Comments
Topics mentioned in this article
Prithvi Shaw Cricket India U19 Australia U19 ICC Under-19 World Cup
Get the latest Cricket news, check out the India cricket schedule, Cricket live score . Like us on Facebook or follow us on Twitter for more sports updates. You can also download the NDTV Cricket app for Android or iOS.