Sumit, Sumit Kumar Jr and Varun Kumar and Mandeep Singh scored in India's exciting win to stay in contention for a final berth. 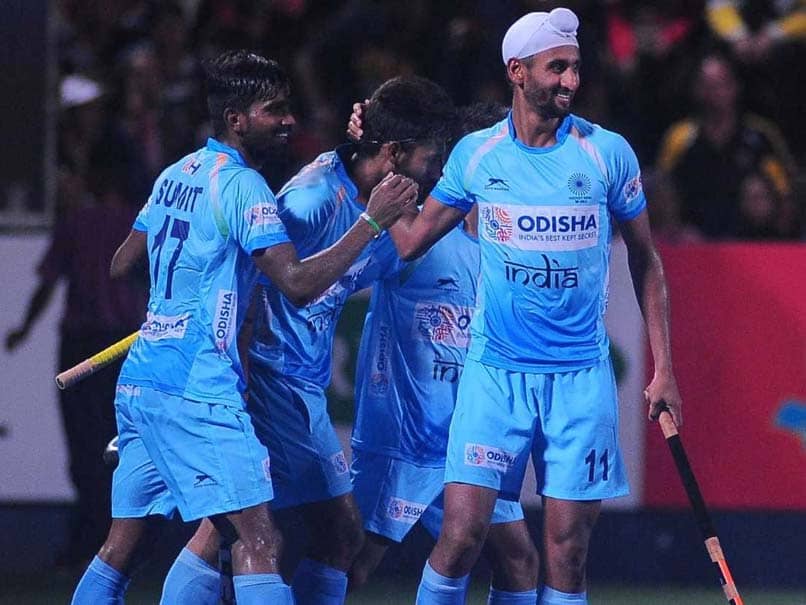 India men's hockey team displayed a determined performance to beat Malaysia 4-2 in an exciting encounter at the 28th Sultan Azlan Shah Cup 2019 in Ipoh, Malaysia on Tuesday. This was India's second win after beating Japan 2-0 in the first match, while they drew the second match against Korea 1-1. The two teams began the first quarter with powerful counter attacks that kept the spectators on the edge of their seats. First, it was India to foray into the striking circle with some skillful tackle by forward Simranjeet Singh but the hosts were alert to ward off initial danger.

Five minutes into the game, Malaysia won their first penalty corner but Krishan B Pathak guarding India's post did brilliantly to save. The following minutes saw accelerating play by both teams, playing on-par with eachother and ended the quarter in a stalemate.

India adapted to full-press, putting their best defence on display. Vice Skipper Surender Kumar continued to remain the main-man for India in the backline thoroughly supported by the experienced Birendra Lakra, making important connections that helped the forwardline surge into the striking circle.

Varun Kumar's pass into the top of the circle saw Hardik Singh work in tandem with Mandeep Singh to set up a shot on goal. It was eventually Sumit who got the right deflection helping India take an important 1-0 lead in the 17th minute.

Later, Mandeep helped India win their first PC but after several re-takes India could not extend their lead.

Later, Malaysia rallying on a good counter attack won their second PC of the match. Though their first attempt was well-saved by PR Sreejesh, who replaced Krishan after the first quarter, Razie Rahim did not disappoint his home crowd as he struck low to give Malaysia an equaliser in the 21st minute.

The match remained tensed, truly living up to it's billing of being the most-awaited match at this year's Sultan Azlan Shah Cup, India continued to use full-press as they looked for potential counter attack.

A good tackle by Sumit to dispossess Malaysia's Faizal Saari set-up India's second goal. This time it was Sumit Kumar Jr who put the ball past Malaysia goalkeeper Hairi Rahman in the 27th minute.

The third quarter was intense with both teams rallying on counter attacks but India remained determined. They challenged the Malaysian defence with solid circle entries, Mandeep Singh worked his magic yet again winning India another important PC. Taken by dragflicker Varun Kumar, he scored on a re-take with a powerful flick, keeping the ball low to the left.

Though Malaysia had made numerous attempts on goal in the third quarter, including a PC, an alert Krishan who had come back to the post did well to keep India's lead.

The fourth quarter, though saw Malaysia score a field goal through Firhan Ashari in the 57th minute who did well to beat Sreejesh at post after he had made two great saves earlier in the quarter. In the 58th minute, a brilliant circle entry and assist by Sumit Kumar Jr to Mandeep Singh helped him score India's fourth goal ending the match on 4-2.

India's defence held strong and adamant to not allow last-minute errors to take home three points from the win.

Comments
Topics mentioned in this article
India Malaysia Hockey
Get the latest updates on IPL 2020, check out the IPL Schedule for 2020 and Indian Premier League (IPL) Cricket live score . Like us on Facebook or follow us on Twitter for more sports updates. You can also download the NDTV Cricket app for Android or iOS.