The U-17 girls section will also see a Haryana-Jharkhand face-off for gold medal on Sunday. 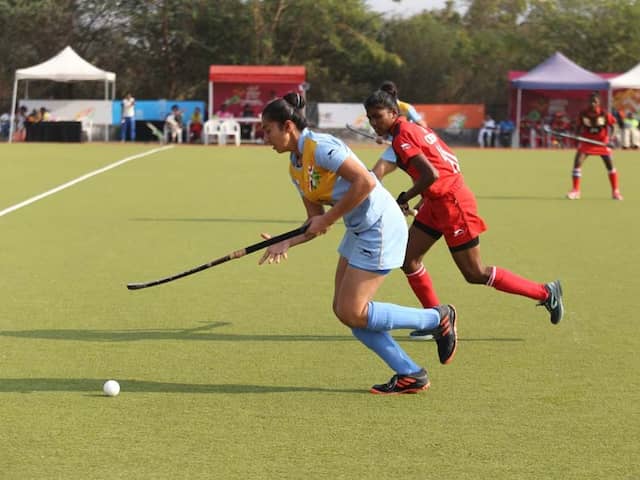 Haryana overpowered Odisha 2-0 to set up a title clash with Jharkhand in the Girls U-21 hockey competition of the Khelo India Youth Games on Friday. In the first semi-final, Jharkhand overwhelmed Punjab 3-0. The U-17 girls section will also see a Haryana-Jharkhand face-off for gold medal on Sunday. The gold medal matches between Haryana and Jharkhand in both Under-17 and Under-21 will be held on Sunday, while the bronze medal play-offs will be held on Saturday, with Odisha meeting Punjab in both Under-17 and Under-21 sections, a media release said.

Haryana started on an aggressive note and opened up a two-goal cushion in the space of four minutes even before the Odisha players could settle down.  Anu put Haryana ahead in the seventh minute when her rasping shot from the top of the circle beat Odisha goalkeeper Asima Minz all ends up.

The shock goal rattled the Odisha defence which conceded their first penalty corner in the 11th minute and skipper Ritu with a powerful drive sounded the boards.

Odisha regrouped and launched a fierce counter-attack but Binita Kujur fumbled inside the circle and her shot went wide.

Though Haryana had a major share of possession, they could not convert the advantage into goals, while Odisha fought back well and did not allow their fancied rivals to widen the 2-0 gap.

Odisha also had their share of chances but their strikers were found wanting in front of goal.

Earlier, Jharkhand outplayed Punjab 3-0 in a one-sided semi-final and the victory margin was not a true indication of the superiority the winners enjoyed throughout the match. But for the missed chances, Jharkhand could have won by at least six goals.

For the winners who led 1-0 at half time, the goal scorers were Alka Dung Dung, Pramila Soreng and Roshni Dung Dung.

Jharkhand went ahead in the second minute when Alka scored off the first penalty corner. The winners totally dominated the first half but could not increase their lead with some poor finishing.

Punjab's girls were hardly able to mount a comprehensive threat on the rival citadel in the first quarter and though they forced two penalty corners in the second quarter, Punjab failed to make use of them.

Two minutes into the second half, Jharkhand earned their fourth penalty corner and this time Pramila Soreng was bang on target to take the tally to 2-0.

Punjab tried hard on the counter but their forwards were not able to create openings or even half-chances.

Jharkhand sealed the match in the 44th minute when Roshni capitalised on a defensive lapse and pushed the ball home.

Comments
Topics mentioned in this article
Hockey Other Sports
Get the latest Cricket news, check out the India cricket schedule, Cricket live score . Like us on Facebook or follow us on Twitter for more sports updates. You can also download the NDTV Cricket app for Android or iOS.