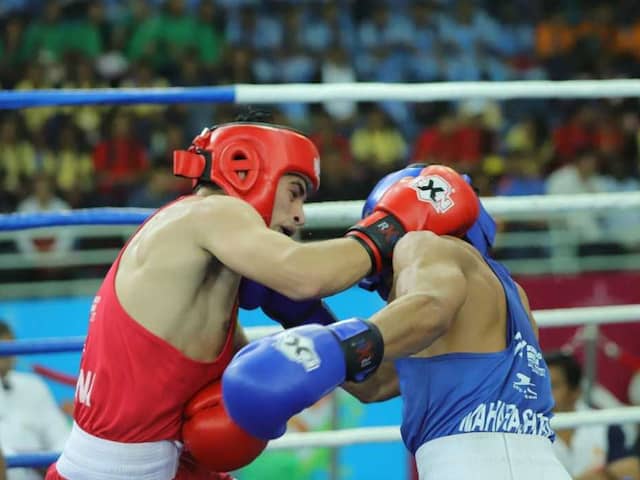 Boxers Ankit Narwal, Vanshaj and Preeti Dahiya played a key role for Haryana who reaped as many as eight gold, eight silver and 15 bronze medals from boxing in the Boys' Under-17 and Girls Under-17 categories at the at the Khelo India Youth Games (KISG) here on Friday.

The girls of Maharashtra -- Devika Ghorpade and Mitika Gunele -- who both have a great interest in dancing too, won a gold medal each in their respective categories. Devika playing in 46kg class edged out Haryana girl Tamanna 3-2.

Meanwhile, Mitika, who was gold medallist at the KISG last year, defended her title in the 66kg class. Effectively using her raw power in a combination of punches and jabs, Mitika outshined Muskan from Haryana. The coaches and Haryana supporters were repeatedly urging Muskan to go all out, but the Haryana girl proves no match to 7th Nation Cup gold medallist Mitika.

Haryana's Vanshaj and Ankit Narwal overcame stiff resistance from Maharashtra pugilists in the final. Vanshaj faced lanky Akash Gorkha in the 57kg class, while Ankit was challenged by Laisharam Singh.

Vanshaj played a clever and despite being at a height disadvantage against his opponent, he managed to gather valuable points in the third round.

Comments
Topics mentioned in this article
Other Sports Boxing
Get the latest Cricket news, check out the India cricket schedule, Cricket live score . Like us on Facebook or follow us on Twitter for more sports updates. You can also download the NDTV Cricket app for Android or iOS.