World number one Rory McIlroy admitted storm delays at the Barclays Singapore Open were "frustrating" on Saturday after finally completing a nearly 24-hour round two which left him seven shots off the pace. 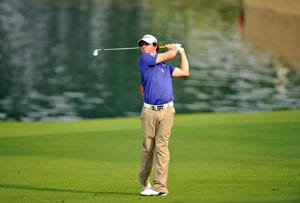 World number one Rory McIlroy admitted storm delays at the Barclays Singapore Open were "frustrating" on Saturday after finally completing a nearly 24-hour round two which left him seven shots off the pace.

McIlroy started the round on Friday morning -- after completing 10 holes of his rain-hit first 18 -- but after two storm interruptions, he still had six to go when play was halted for the day.

The 23-year-old, accompanied by tennis-star girlfriend Caroline Wozniacki, was back on the course at 7:30 am on Saturday and he added one birdie for his second consecutive round of one-under-par 70.

McIlroy is currently tied for 21st, meaning time is short if he is to claim the high finish he needs to clinch the European Tour order of merit -- especially after officials warned the event could be cut to 54 holes.

"The course is not easy but especially having to go out and come back in. It's a been a bit of a frustrating few days," McIlroy said.

"Obviously it would be nice to play a nice stretch of golf and not have to stop and start all the time but that's just the way it is and I have to deal with it but I'm pretty pleased with my two under.

"Definitely could have been a bit better. My putting hasn't been as sharp as it usually is so I feel like if I can throw a few more putts, the score would be better for me."

McIlroy showed his frustrations on Friday when he tweeted a picture of Wozniacki asleep on a desk, with the comment: "Nearly 12 hours at the golf course already today! @CaroWozniacki really enjoying her holiday this week... Not!!"

The Northern Irishman controversially skipped last week's WGC-HSBC Champions to watch Wozniacki play in Bulgaria, and he said it was "great" she had returned the favour by attending his tournaments in Singapore, Hong Kong and Dubai.

"Yes, it's great. This is her off-season. This is sort of a chance to take a break but getting up at 5:00 am to watch me play golf isn't exactly my idea of a holiday," he said.

"So hopefully after tomorrow or whenever we're done we can get a couple of days off and chill out somewhere before going to Hong Kong.

"It's good to have her here and she'll be with me in Hong Kong, Dubai also and it's nice to get to spend some time with her."

Ryder Cup vice-captain Thomas Bjorn was the mid-round leader at nine under par with four holes to go, two better than South Africa's George Coetzee and Englishman Chris Wood, who were both in the clubhouse.

"I'm going to try and play the best I can and see what happens," McIlroy said, as he waited to start his third round.

Comments
Topics mentioned in this article
Golf Rory McIlroy
Get the latest Cricket news, check out the India cricket schedule, Cricket live score . Like us on Facebook or follow us on Twitter for more sports updates. You can also download the NDTV Cricket app for Android or iOS.