Chiragh Kumar's previous two top-10s in last two years have both been achieved at the Indian Open on his home course, so a top-5 in Taipei will do a world of good for his confidence. 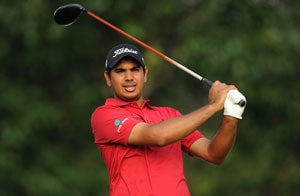 Chiragh Kumar closed the week with a two-under 70 to record his best finish in more than 22 months as he ended tied fifth at the Yeangder Tournament Players Championship (TPC) in Taipei on Sunday.

Chiragh's previous two top-10s in last two years have both been achieved at the Indian Open on his home course, so a top-5 in Taipei will do a world of good for his confidence.

Gaganjeet Bhullar (in pic), the champion here last year, dropped from overnight 22nd to tied 41st with a final round of 76 and Rahil Gangjee, too, had a disappointing finish with a round of 74 that saw him finish tied 55th.

Thai star Thaworn Wiratchant rediscovered his best form as he won the Yeangder TPC for an unprecedented 16th Asian Tour title. The reigning Asian Tour Order of Merit winner, whose best 2013 result prior to this week was tied 28th in May, battled to a four-under-par 68 for a 13-under-par 275 total to win by one-shot at the USD 500,000 Asian Tour event.

Chiragh looked set for a good finish as he began the day with an eagle on the par-5 first, which he had birdied on previous three days. But he bogeyed the second and again seventh. A birdie on par-3 eighth saw him turn in one-under. On the back nine he birdied the 10th and the closing 18th and dropped a shot in between 12th.

"Considering how I felt the whole week with fever and then cough and cold, it was a satisfying finish, though I played fairly well on first two days. The third day pulled me down, but I am happy at the end of the week," said Chiragh.

Overnight leader Kim, winner of the Asian Tour Qualifying School in January, led for most of the round but stumbled in the closing stretch when he made three straight bogeys from the 15th hole. He settled for second after shooting a 70 at the Linkou International Golf and Country Club.

Angelo Que of the Philippines, a three-time Asian Tour winner, ended his campaign with a 66, the best round of the day, to finish lone third on 279 while Chinese Taipei's Chan Shih-chang (67) was a further shot back.

Comments
Topics mentioned in this article
Golf Thaworn Wiratchant Mithun Perera Shiv Kapur Darren Clarke Gaganjeet Bhullar Kunal Bhasin
Get the latest Cricket news, check out the India cricket schedule, Cricket live score . Like us on Facebook or follow us on Twitter for more sports updates. You can also download the NDTV Cricket app for Android or iOS.