Masters champion Bubba Watson will chase his first international victory when he tees up at the Thailand Golf Championship next month, organisers said on Monday. 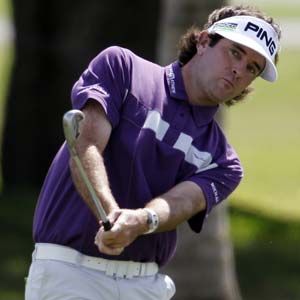 Masters champion Bubba Watson will chase his first international victory when he tees up at the Thailand Golf Championship next month, organisers said on Monday.

World number eight Watson claimed his first major at Augusta in April, sensationally beating Oosthuizen in a play-off, but the American has not won since.

His best finish has been tied second at the Travelers Championship in June.

"I would love to walk away with the trophy there," Watson.

"I'm looking forward to going to the Thailand Golf Championship and challenging myself and challenging the golf course and trying to beat some of the best players in the world."

Watson said England's Westwood convinced him to commit to the Thailand Golf Championship, being held from December 6-9, which will be only his second trip to Asia after featuring in the WGC-HSBC Champions in China last week.

"Lee won it last year and he said it was a great event and he enjoyed his time there. I heard there are some islands which are beautiful and I would like to do some sight-seeing," Watson said.

The Thailand Golf Championship is the penultimate event of the Asian Tour calendar.

Comments
Topics mentioned in this article
Golf Jeev Milkha Singh Rory McIlroy
Get the latest updates on IPL 2020, check out the IPL Schedule for 2020 and Indian Premier League (IPL) Cricket live score . Like us on Facebook or follow us on Twitter for more sports updates. You can also download the NDTV Cricket app for Android or iOS.