Soderling cruises into third round at French Open

Sweden's Robin Soderling reached the third round of the French Open on Thursday with a 6-3, 6-4, 6-4 win over Spanish qualifier Albert Ramos. 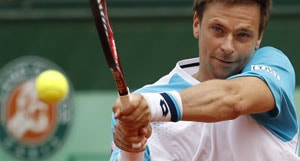 Sweden's Robin Soderling reached the third round of the French Open on Thursday with a 6-3, 6-4, 6-4 win over Spanish qualifier Albert Ramos.

The fifth seed and runner-up for the last two years will play either Marcos Baghdatis of Cyprus or Leonardo Mayer of Argentina for a place in the last 16.

It was a typically bludgeoning performance from the big Swede who used his firepower off both flanks to send Ramos scurrying about from side to side of the court.

Soderling jumped out into a 3-0 lead and had little difficulty pocketing the first set.

It was the same in the second with Soderling comfortable on his own serve and Ramos struggling to hold his. The fifth seed broke in the third game and he was soon two sets up.

Soderling broke again to lead 4-3 in the third set only to drop his own serve for the first time in the match in the following game.

But that proved to be a mere blip in Soderling's drive into the third round as he broke Ramos again to 15 and then served out for the match which he completed in four minutes short of two hours.

Soderling, who lost last year's final in straights sets to Rafael Nadal is seeded to meet the Spaniard once again in this year's quarter-finals.