Li Na, Asia's highest-ranking player in tennis history and the top seed at the WTA tournament, downed Peng, who was seeded fifth, 6-4, 7-5. 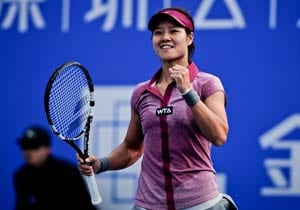 Li, Asia's highest-ranking player in tennis history and the top seed at the WTA tournament, downed Peng, who was seeded fifth, 6-4, 7-5.

Peng, down 4-1 in the second set, streaked ahead with four straight victories to take a 5-4 lead before Li battled back to win the last three games and the match.

Li, 31, was the defending Shenzhen Open champion and the win marked her first ever Women's Tennis Association (WTA) title defence, according to the organisation. She is currently ranked number three in the world.

It also marked her eighth WTA title and the first since her win at Shenzhen last year, according to the WTA.

Her success on the world tennis stage has sparked new Chinese interest in the sport as well as a swell of national pride.

Peng has yet to win a WTA title and is now 0-6 in finals, according to the association.

In the doubles final, Monica Niculescu of Romania and Klara Zakopalova of the Czech Republic defeated the Ukrainian twin sisters Lyudmyla Kichenok and Nadiya Kichenok 6-3, 6-4.

Comments
Topics mentioned in this article
Tennis Shuai Peng Sania Mirza Francesca Schiavone Na Li Marion Bartoli French Open 2011
Get the latest updates on IPL 2020, check out the IPL Schedule for 2020 and Indian Premier League (IPL) Cricket live score . Like us on Facebook or follow us on Twitter for more sports updates. You can also download the NDTV Cricket app for Android or iOS.