Pope Francis not to attend friendly between Italy and Argentina

Pope Francis, who is known to be a keen football fan, will however meet the players on the eve of the match. 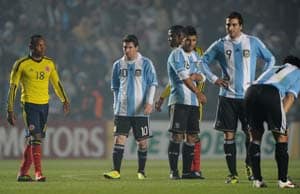 Pope Francis will meet Italy and Argentina players on the eve of their friendly in Rome but will not attend the August 14 game, a spokesman said on Thursday.

Francis, who is himself from Argentina and is known to be a keen football fan, was elected earlier this year as the first ever Latin American pontiff.

"It will be a purely private meeting," Vatican spokesman Federico Lombardi told AFP.

The meeting will take place in the richly-decorated Clementine Hall in the Vatican Apostolic Palace.

On a visit to Brazil earlier this month, the pope remarked that the sport was a "national passion" in the country but quickly pointed out that "Jesus offers us something better than the World Cup".

Comments
Topics mentioned in this article
Italy Football French Open 2011
Get the latest updates on IPL 2020, check out the IPL Schedule for 2020 and Indian Premier League (IPL) Cricket live score . Like us on Facebook or follow us on Twitter for more sports updates. You can also download the NDTV Cricket app for Android or iOS.