He has won 58 out of 59 matches at Roland Garros and boasts a 19-4 winning record over Ferrer. Sixteen of those wins have been on clay. The 31-year-old Ferrer has won just one of their claycourt encounters and that was their first career meeting in 2004 when Nadal was just 16. 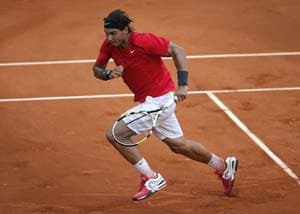 Rafael Nadal has played down his role as favourite for an historic eighth French Open title and expects David Ferrer to make the most of his maiden Grand Slam final appearance on Sunday.

Defending champion Nadal will become the first man to win the same major eight times if he beats compatriot Ferrer who has made his first Grand Slam final at the 42nd time of asking.

"I don't feel favourite. I feel that I am finalist. I arrived to the final playing well. I improved a little bit in every match during the tournament," said Nadal.

Despite his modesty, the 27-year-old Nadal has everything stacked in his favour.

He has won 58 out of 59 matches at Roland Garros and boasts a 19-4 winning record over Ferrer. Sixteen of those wins have been on clay.

The 31-year-old Ferrer has won just one of their claycourt encounters and that was their first career meeting in 2004 when Nadal was just 16.

Nadal has been the sensation of 2013, winning 42 of 44 matches and six titles since his return in February from a seven-month injury lay-off to rest his troublesome knees.

But he has spent six hours more on court than Ferrer in Paris and needed the best part of five hours to defeat world number one Novak Djokovic in an epic semi-final.

Nadal and Ferrer have been friends and Davis Cup teammates for over 10 years and are regular partners when it comes to video games.

But that friendship will be put aside on Sunday with Nadal, who is playing in his 17th Grand Slam final and seeking a 12th major title, wary of anyone who writes off Ferrer.

"Tennis is a fair sport, and if somebody deserves to win titles, to be in the finals of a Grand Slam, is David," said Nadal.

"Somebody deserves to be in the final of a Grand Slam it is David. His level of tennis is higher every year. He's always playing at a very high level and very often."

Ferrer has already lost three times to his countryman in 2013, again all on clay.

"It's a dream for me to be in the final of a Grand Slam, and Roland Garros is more important for me," said Ferrer.

"I will fight. It's very difficult to beat Rafael on all the surfaces, but on a clay court it is more difficult. I think I need to play my best tennis to beat him. I need to play very aggressive all the match."

Sunday's match will be the third all-Spanish final at a Grand Slam and all have come in Paris.