Eight-time French Open champion Rafael Nadal said in an interview published on Tuesday that he is not setting his sights on Roger Federer's record of 17 Grand Slam titles, despite claiming his 12th at Roland Garros last weekend. 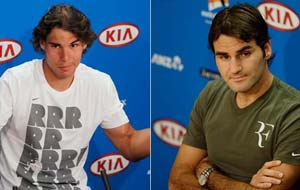 Eight-time French Open champion Rafael Nadal said in an interview published on Tuesday that he is not setting his sights on Roger Federer's record of 17 Grand Slam titles, despite claiming his 12th at Roland Garros last weekend.

That came after he only recently returned from seven months out with a knee injury.

But Nadal claimed he was happy just to be on the court again.

"It is something that right now I see as light years away, it is not something I am planning," he said of Federer's record in an interview with Spanish sports daily Marca.

Nadal's form since returning to the tour in February has been remarkable.

He has reached nine consecutive finals, winning seven tournaments in the process and said he was delighted with how his knee has reacted to such a heavy workload throughout the clay court season.

"Three months ago I was limp. At the start I was very sore but with the competition the feelings didn't get worse but better and this is great news," he added.

"In the next few days I will have the knee checked after many consecutive weeks without doing so. I hope that the results are satisfactory because it has held up very well."

Having retained his French Open title, the 27-year-old's attention now turns to trying to win a third title on the grass at Wimbledon.

The Spaniard will miss a planned warm-up event at Halle, Germany, to ensure he is well-rested on his arrival in southwest London, but admitted that could make him susceptible to an upset in the early rounds.

Nadal suffered the shock of the tournament last year when he was ousted by the then world number 100 Lukas Rosol in five sets in the second round and he was hoping to avoid a powerful hitter like the Czech in the opening rounds.

"To start with it will (be more difficult not having played a warm-up event on grass). Afterwards you never know. We will see if I can have good training sessions there and manage to get through the first few rounds," he went on.

"What I want are players that give you rhythm and that help you to be able to win. Not those that end the point with one stroke."