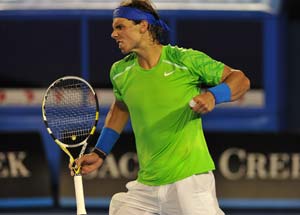 Eight-time French Open champion Rafael Nadal drops from No. 4 to No. 5 in the ATP rankings this week, swapping places with David Ferrer, the man he beat in the Roland Garros final.

Ferrer joked after his straight-set loss to Nadal: "I prefer to win here and to stay No. 5."

Novak Djokovic remains No. 1 on Monday, followed by No.2 Andy Murray and No.3 Roger Federer.

French Open champion Serena Williams increased her lead at No. 1 in the WTA rankings, while the runner-up, 2012 winner Maria Sharapova, fell from No. 2 to No. 3, trading spots with Victoria Azarenka.