Rafael Nadal smiled back from the front pages of Spanish newspapers on Monday, after he lifted his record eighth French Open title with a 6-3, 6-2, 6-3 win over compatriot David Ferrer. 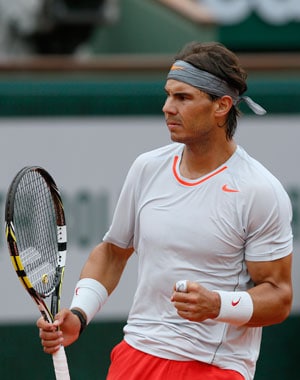 Rafael Nadal smiled back from the front pages of Spanish newspapers on Monday, after he lifted his record eighth French Open title with a 6-3, 6-2, 6-3 win over compatriot David Ferrer.

The 27-year-old Spaniard's triumph made him the first man to ever win the same Grand Slam title on eight different occasions.

"The emotion of a country," said Madrid sports daily Marca, as Nadal also moved into joint-third in the all-time list of Grand Slam winners alongside Australian Roy Emerson on 12.

"Nadal's figures on the red dust in general and particularly at Roland Garros are scary," the paper assessed.

"Between the four walls of the French tournament his numbers have reached 59 matches won, more than anyone, and just one defeat to Robin Soderling in the quarter-finals in 2009."

The other Madrid sports daily AS led with "Nadal breaks the limits".

One columnist said "this tournament, this city, form part of the axis of his monumental career, which has many more things besides, but he is really special thanks to Paris and its emblematic tournament".

Nadal even led the news in the mainstream press, with El Pais hailing his remarkable comeback from a seven-month injury lay-off.

Since returning in February, Nadal has reached nine consecutive finals and gone on to win a remarkable seven titles.

"Above the medals that adorn his curriculum, there is the heroic odyssey of a champion like no other, capable of triumphing in June despite being suffering an injury in his left knee in January," the newspaper considered.

The Catalan press also dedicated its front pages to the Majorcan's triumph, with El Mundo Deportivo lauding him "Rafa VIII" on their front page, whilst Sport hailed him simply "the greatest".