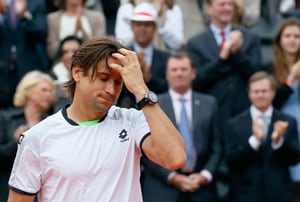 David Ferrer took one look at the weather in Paris this morning and knew right away that his already slim chances of upsetting Rafael Nadal in the French Open final had just got slimmer.

His intuition proved to be spot on as he lost 6-3, 6-2, 6-3 to a player he considers to be a close friend, but a merciless adversary on court.

Ferrer did manage to win a set in each of their two meetings leading into Roland Garros - in Madrid and Rome, but there the conditions, he said, had been more in his favour.

For today's final the cold and the raindrops that fell for most of the match meant that the claycourts were slower and the balls were heavier.

"To beat Rafael on a claycourt, I need to play more aggressive. I need to finish the points at the net and to play my best tennis to beat him.

Still, Ferrer felt that the one-sided scoreline did not give a true picture of how the match had been and that he had had his chances, both in the first set and espcially in the third when he had break points at 3-3.

"I had my chance in the third set to go a break up," he said.

"But in important moments like that I have more pressure and it's difficult to beat him.

"I think he has the best mentality I ever seen in my career. He has everything. He can play aggressive, his physical side is unbelievable. He can play five sets two days ago (semi-final win against Novak Djokovic) and today he can play similar tennis."

At 31, Ferrer knows that he does not have too many more years in the top bracket, but he says he is still hopeful of going all the way and winning a Grand Slam title.

And he is not ruling out that happening at Wimbledon, where he struggled in the early years of his career, but where he reached the quarter-finals last year before losing to Andy Murray.

"Last year I adapted my game and I had very good grass results. I will continue and improve, he said.