Six major champions successfully made their way through the first round of the French Open on the opening day. One didn't. 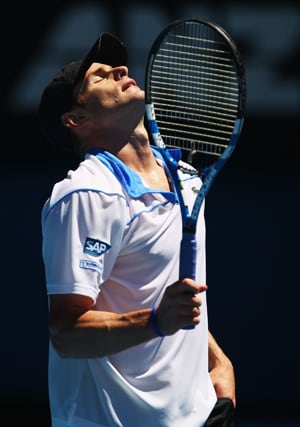 Six major champions successfully made their way through the first round of the French Open on the opening day. One didn't.

Venus Williams, a seven-time Grand Slam champion, recovered from a slow start to beat 19-year-old Paula Ormaechea of Argentina 4-6, 6-1, 6-3. It was her first match at a major tournament since revealing she had been diagnosed with an autoimmune disease.

The 31-year-old Williams, a former top-ranked player who is now No. 53, is 12-4 this season. She pulled out of the U.S. Open last August before her second-round match, saying she had Sjogren's syndrome, an autoimmune disease that can cause fatigue and joint pain. She returned to the tour in March.

Earlier, Sam Stosur and Svetlana Kuznetsova were first up on the main two courts, and both won in straight sets.

Juan Carlos Ferrero and Juan Martin del Potro soon followed on the same courts, and with similar results. And 2008 French Open champion Ana Ivanovic then made it 5 for 5. The lone loser was Andy Roddick, the 2003 U.S. Open champion from the United States.

"I move just horrendously out here. My first step is just so bad on this stuff," Roddick said. "I feel like I'm always shuffling or hopping or not stopping or something. So my footwork on this stuff now is just really bad."

Kuznetsova won the French Open title in 2009 and the U.S. Open in 2004 but is seeded No. 26 this year. Against Mirjana Lucic of Croatia, the Russian faced little trouble despite being broken twice in the second set. She eventually won 6-1, 6-3.

"I love this tournament. Even before I won I always enjoyed coming here," Kuznetsova said. "It's (a) special atmosphere here."

Ivanovic beat Lara Arruabarrena-Vecino of Spain 6-1, 6-1. The 13th-seeded Serb won her only major title at Roland Garros in 2008, but then lost in the fourth round a year later. She fell in the second round in 2010, and then lost in the first round last year.

No. 10 Angelique Kerber of Germany and No. 20 Lucie Safarova of the Czech Republic also advanced to the second round, along with American players Melanie Oudin and Irina Falconi.

The French Open is the only Grand Slam tournament that starts on a Sunday. The other three all start on Mondays.

"I don't think it's too big a deal now that it's more of a proper schedule," Stosur said. "I think the first year there was only a handful of matches, and, yeah, if you were on the schedule then, it really didn't feel like the tournament started. Nobody else was thinking that the tournament had started."