Rafael Nadal is so unflinching, so nearly unbeatable, while sliding and grinding and pounding his way past opponent after opponent at the French Open. Away from the red clay, Nadal is human, of course. Humble, even. 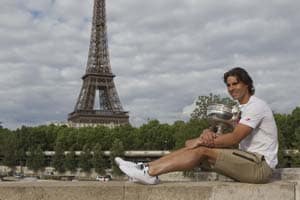 Rafael Nadal is so unflinching, so nearly unbeatable, while sliding and grinding and pounding his way past opponent after opponent at the French Open. Away from the red clay, Nadal is human, of course. Humble, even.

Nadal's mind, generally impervious to negativity on court, was fraught with worry for the 18 or so hours he and No. 1-ranked Novak Djokovic were made to wait, from Sunday evening into Monday afternoon, before continuing the fourth set of their rain-interrupted final at Roland Garros, a match filled with historic implications.

While eating dinner, while leafing through his favourite Japanese anime comic book in his hotel room before bedtime, while getting in a pre-match practice session, Nadal focused not on the tantalizingly close prospect of a record seventh French Open championship, but rather on the other possible outcome: a loss in a fourth consecutive major final against Djokovic, who in turn would become the first man since 1969 to collect four Grand Slam titles in a row.

"You never know if you're going to win another one," Nadal said. "Opportunities pass ... Losing a fourth in a row would have been tough for me."

When play was halted by showers on Sunday, the No. 2-ranked Nadal was clinging to a lead quickly shrinking as his performance dipped and Djokovic's rose. It wasn't until a few minutes before setting foot back on Court Philippe Chatrier - his favourite arena at his favourite tournament on his favourite surface - that Nadal set aside his anxiety. Oh, did he. Once again the King of Clay, Nadal overwhelmed Djokovic for the 50 minutes and nine games they played on Monday, wrapping up a 6-4, 6-3, 2-6, 7-5 victory that allowed Nadal to earn French Open trophy No. 7, breaking a tie with Bjorn Borg.

"I don't know if I am the best or not," said Nadal, who won his 11th Grand Slam title overall. "I am not the right one to say that."

Djokovic, for his part, had zero doubts.

"He's definitely (the) best player in history ... on this surface," said Djokovic, whose 27-match Grand Slam winning streak ended, "and results are showing that he's one of the best ever."

Can't argue with that. Since his French Open debut at age 18 in May 2005, Nadal is 52-1 for his career at the tournament, the only loss coming to Robin Soderling in the fourth round in 2009.

Asked to explain his success on clay, Nadal pointed not to his uppercut of a topspin-slathered forehand, or his superior returns of serve, but rather to his movement, his mental fortitude, and this: "I always was scared to lose."

Djokovic gave Nadal reason for added concern, having beaten him in the finals at Wimbledon in July, the U.S. Open in September, and the Australian Open in January. Djokovic was attempting to be only the third man to win four major tournaments in succession, joining Don Budge in 1938, and Rod Laver in 1962 and 1969.

Alas, Djokovic ran into Nadal at Roland Garros. The same thing happened to Roger Federer in 2006 and '07, when his Grand Slam bids fell one win short because of losses to Nadal in the French Open final.

"For us, it was very important to win here now against Djokovic, because we knew that if he won again, the fourth one, then (Rafa) completing a Grand Slam of losses would have been ugly," said Toni Nadal, Rafael's uncle and coach. "And we were very close to doing that."

Instead, his nephew gained ground on Federer's record of 16 Grand Slam titles, tying Borg and Laver for fourth place.

Borg walked away from the sport at age 25 after losing the 1981 Wimbledon and U.S. Open finals to John McEnroe.

"If Borg had kept playing until he was 30, he might have won 10 French Opens - something Nadal could wind up doing if he keeps playing," said Corrado Barazzutti, a top-10 player in the 1970s who lost all 10 career matches against the Swede.

"Borg was a player who, particularly on red clay, was unbeatable, in my opinion. Facing him on a court was like being trapped in a tunnel. It was dark. You couldn't move," Barazzutti said. "That must be what it's like to play Nadal."

Even a passing shower that the players waited out on the sideline didn't slow Nadal on this afternoon. He's from the island of Mallorca, and loves to spend his rare downtime playing golf or hanging out at the beach or fishing.

Nadal dropped to his knees on winning and covered his face, thick strips of white tape covering the knuckles and fingertips of his racket-wielding left hand. He rose, chucked his racket, and clambered into the stands for a group hug with his father and various members of his entourage. Then he leaped into Toni's arms, spilling his uncle's bottle of water.

"When you lose, it's because you don't deserve the title," Nadal said. "So in my mind, this was the final I had to win. That's why I was so emotional."

Nearly two hours later, Nadal and more than a dozen others gathered on the court for a photo session of the sort you might see at a wedding. First, everyone stood together for a picture, Nadal cradling the trophy. Then came various two-person poses: Rafa with Dad; Rafa with Uncle Toni; Rafa with his buddy Pau Gasol of the Los Angeles Lakers.

Might seem a tad over-the-top for a guy who's done this so many times.

Then again, you only win your seventh French Open trophy once.

Comments
Topics mentioned in this article
Tennis Andy Murray Serena Williams Lleyton Hewitt French Open 2012 Venus Williams Maria Sharapova Roger Federer Rafael Nadal
Get the latest updates on IPL Auction 2023 and check out  IPL 2023 and Live Cricket Score. Like us on Facebook or follow us on Twitter for more sports updates. You can also download the NDTV Cricket app for Android or iOS.