Rafael Nadal admitted on Monday that a deep-seated fear of failure drove him to a record seventh French Open title and will keep him playing until his love of the sport finally drains away. 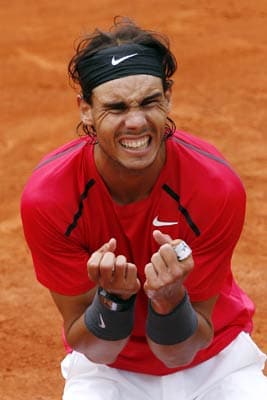 Rafael Nadal admitted on Monday that a deep-seated fear of failure drove him to a record seventh French Open title and will keep him playing until his love of the sport finally drains away.

The 26-year-old Spaniard refuses to accept the crown as the greatest claycourt player of all time, despite surpassing Bjorn Borg's six Roland Garros triumphs which he matched last year.

With 11 Grand Slam titles under his belt, he is steadily closing in on Roger Federer's record of 16 and has time on his side being almost five years the Swiss star's junior.

"I have always been scared of losing," confessed Nadal, after his 6-4, 6-3, 2-6, 7-5 win over world number one Novak Djokovic in the Roland Garros final which had been held over from Sunday because of rain.

"That's why I always have full respect for opponents, knowing I can win or lose. I have kept that focus for eight years."

"It is not for me to say if I am one of the best. I have probably had the best results and it's a great and emotional thing to win seven French Opens," said Nadal, whose career record in Paris now stands at 52 wins and just one defeat.

"But the important thing is to win Roland Garros, whether it's the first time, sixth or seventh."

His coach, and uncle, Toni Nadal claimed in the immediate aftermath of Monday's win that his nephew was unfortunate to be playing at the same time as Djokovic and Roger Federer.

The inference being that Nadal would have many more than the 11 majors he currently holds.

Of the last 34 Grand Slam tournaments, 31 have been shared between the world's top three.

Juan Martin del Potro was the last man to break the stranglehold when he won the 2009 US Open.

"I feel lucky to have achieved the things that I have," said Nadal. "I have great rivals and even in such an era of fantastic players, I am happy to have won as many matches as I have. I am a lucky man."

Unlike Borg, Nadal insists he has no intention of following the Swede's example of retiring at the peak of his career.

That is depsite his long-standing battles against knee injuries which have often threatened to derail his career.

"I will be here until injuries restrict either me or my chances of playing. I will keep going as long as the motivation and the passion are with me," he said.

"Hopefully that will be for a long time yet. I will keep working hard every day, that's my goal and to keep improving, to wake up and have the passion to practice. When that changes, I will say 'goodbye guys' but that's not the case today."

Djokovic had defeated Nadal in the finals at Wimbledon, the US Open and Australian Open and needed victory on Monday to join Don Budge and Rod Laver as only the third man to hold all four Grand Slam titles at once.

But those triumphs had come on grass and hard courts.

Clay, however, is a different matter.

"He is definitely the best player in history on this surface and his results are showing that he's one of the best ever players that played this game," said Djokovic.

"I mean, he's only 26 years old. We are very young, and we played over 30 times against each other, and hopefully we can have many more battles in the next years."

Comments
Topics mentioned in this article
Tennis Mahesh Bhupathi Rafael Nadal Jie Zheng Jo-Wilfried Tsonga Andy Murray Novak Djokovic Na Li French Open 2012
Get the latest updates on IPL Auction 2023 and check out  IPL 2023 and Live Cricket Score. Like us on Facebook or follow us on Twitter for more sports updates. You can also download the NDTV Cricket app for Android or iOS.