World number one Novak Djokovic is looking forward to a new rivalry at the summit of men's tennis after losing a hard-fought French Open final against Spanish claycourt king Rafael Nadal. 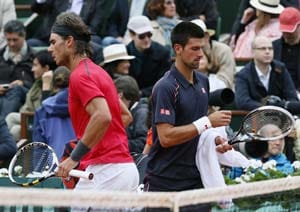 World number one Novak Djokovic is looking forward to a new rivalry at the summit of men's tennis after losing a hard-fought French Open final against Spanish claycourt king Rafael Nadal.

The 25-year-old Serb insisted the sport's biggest matchup was still between 30-year-old Roger Federer, holder of a record 16 Grand Slam titles, and Nadal, who at 26, already has 11 majors topped by a record seven at the French Open.

But he clearly singled out Nadal as his main foe.

"We are very young, and we played over 30 times against each other, and hopefully we can have many more battles in the next years," Djokovic said.

Five-time major winner Djokovic -- who holds the Wimbledon, US Open and Australian Open titles -- on Monday missed his chance of emulating Don Budge (1938) and Rod Laver (1962 and 1969) by holding all four Grand Slams at once.

A disastrous double fault cost him a chance to stretch the Roland Garros final to five sets against Nadal after an overnight rain delay -- only the second time in history that the final had to be fought in the third week.

"I think the sport is experiencing some really good times now," said Djokovic, who beat a struggling Federer in straight sets on Friday to set up the final with Nadal.

Happily married Federer believes he has a few more years of top-level competition left in him, including playing at the 2016 Olympics, even though he turns 31 in August and is busy looking after twin girls when not on court.

Djokovic's immediate goal is to take a week off before practising on grass to defend his title at Wimbledon, an event dominated in the past decade by Federer, who holds six All England titles, just one short of the seven held by Pete Sampras.

"Obviously Federer and Nadal have still, I think, the biggest rivalry in the sport," Djokovic said.

"Because they have been at the top for so many years, they have been so dominant. I mean, I just joined that rivalry, I think, you know, just recently, couple years ago," he said.

"We're attracting a lot of attention to men's tennis because we have, you know, these two great players, and (Andy) Murray, myself, and we really have some great players, some charismatic players, a lot of personalities."

"This is good for tennis," said Djokovic, who was stunned by his loss to Nadal, even though he kept his top world ranking.

"It's beautiful. These matches make you feel like all the work that you put into it is worth (it), you're living for this moment to play finals of any Grand Slam, and sometimes you win, sometimes you lose," he said.

"I lost this time. But I believe that there are still many years to come, and hopefully I can come back stronger."

Nadal himself paid trobute to his rivals for driving his desire to win.

"I feel very lucky to achieve all that I achieved until today," he said after his latest victory.

"I have great rivals."

Comments
Topics mentioned in this article
Tennis Jo-Wilfried Tsonga Rafael Nadal Andy Murray Novak Djokovic Na Li French Open 2012
Get the latest updates on IPL Auction 2023 and check out  IPL 2023 and Live Cricket Score. Like us on Facebook or follow us on Twitter for more sports updates. You can also download the NDTV Cricket app for Android or iOS.