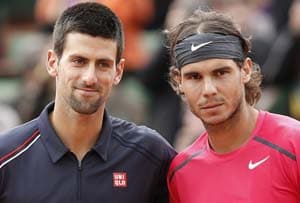 This one, between Nadal and Novak Djokovic, offers the added benefit of being more competitive.

And given the participants' ages, it should last a while.

Nadal and Djokovic played each other to decide the titles at each of the past four Grand Slam tournaments, most recently the French Open, where Nadal won a two-day, rain-interrupted final 6-4, 6-3, 2-6, 7-5.

No one should be surprised if they make that five in a row in less than a month's time at Wimbledon.

Which would be remarkable, considering that before these two came along, no pair of men had met in more than two consecutive major finals since the start of the Open era in 1968. Not Borg and McEnroe. Not Sampras and Agassi. Not even Federer and Nadal.

"We are very young, and we played over 30 times against each other," said Djokovic, who trails 19-14 overall in their series, "and hopefully we can have many more battles in the next years."

The No. 1-ranked Djokovic turned 25 last month; No. 2 Nadal is barely a week past his 26th birthday.

If they do meet again at Wimbledon next month or the U.S. Open in September, there will be those who will wonder whether Nadal's current three-match winning streak against Djokovic - at Monte Carlo, Rome and Paris, all on red clay - says much about who has the upper hand in general at the moment.

It might just reflect superiority on one particular surface.

"I don't think (Nadal) necessarily still has the answers. I think he fights through this match, and it's clay, and he's confident, and he wins the key points there toward the end," seven-time major champion Mats Wilander said after presenting Nadal with the trophy at Roland Garros on Monday.

They're probably the sport's two best returners of serve, two best movers and two best retrievers of opponents' shots. They're also capable of switching from defense to offense in a blink as well or better than anyone. In the French Open final, they played more than 60 points that lasted 10 strokes or more - lengthy, complicated exchanges that resulted not from conservative, keep-the-ball-in-play tennis, but rather an extraordinary ability to force the other to come up with the goods over and over - and each won more than 30.

Wilander pointed to the puzzle of the top three men in the sport, Djokovic, Nadal and the No. 3-ranked Federer, a trio that has combined to win 28 of the past 29 Grand Slam titles dating to 2005 (the exception: Juan Martin del Potro beat Federer in the 2009 U.S. Open final).

"For us, it was very important to win here against Djokovic, because a fourth Grand Slam loss would have been ugly," said Toni Nadal, Rafael's uncle and coach.

Now they start over at Wimbledon, where play begins June 25. Before opening the defense of his first title at the All England Club, Djokovic will rest - he's taking this week off.

"That's the calendar," he said. "The calendar says we only have this period of time on clay, and I don't have more chances to play on clay."

Don't feel too sorry for him. Sure, Nadal is the undisputed King of Clay, owner of a record seven French Open titles. But he also already owns two Wimbledon championships, in addition to three runner-up finishes there - against Federer in 2006 and 2007, and against Djokovic last year.

Nadal already has 11 Grand Slam titles, Djokovic five. Put those numbers together, and you get Federer's 16, the record.

The question isn't whether Nadal and Djokovic will continue to add to their totals.

The question is how many more times they will do it at the other's expense.