Sweep away the clay, bring on the grass summed up Roger Federer's emotions after his French Open defeat to Novak Djokovic on Friday. 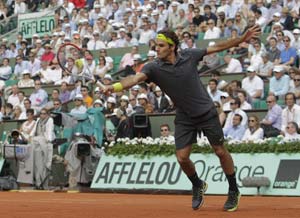 Sweep away the clay, bring on the grass summed up Roger Federer's emotions after his French Open defeat to Novak Djokovic on Friday.

The Swiss star lost in straight sets 6-4, 7-5, 6-3 to the top seed from Serbia in a semi-final encounter that left him on a record 16 Grand Slam titles, the last coming over two years ago at the 2010 Australian Open.

It was a poor performance from Federer, by his own superlative standards, and it brought down the curtain on a claycourt season that, for him, was a damp squib after a promising few months.

"That's how it goes sometimes. I've got to change things around now for grass anyway," he said.

"I'm looking forward to that. It's been a difficult clay court season. I wasn't in the best shape physically, to be quite honest.

"Still, it gives me a little bit of a lift, coming into the grass court season now."

The grass court season for Federer traditionally means Wimbledon and what he has always maintained is the title that means more to him than any other.

This year though there are two Wimbledon titles at stake, the other being the Olympic title, the one major honour that, unlike arch-rival Rafael Nadal, has so far eluded him, although he did win doubles gold for Switzerland with Stanislas Wawrinka at Beijing four years ago.

Federer, who will turn 31 in August, had his chances against Djokovic, especially in the second set when he jumped out into a 3-0 lead.

But in windy, variable conditions, he never really settled into his game, while Djokovic, who needed two five-setters in the two previous rounds, was able to establish more consistency in his game.

"I was struggling to sort of keep the ball in play long enough, even though I wasn't hitting the ball poorly," he said.

"It's been a tough week for me. Maybe in these conditions today didn't help me, help the cause, let's put it that way.

"I did have enough chances, so it's no excuse there. I tried, and it just didn't work out today."

Federer also had words of understanding for Djokovic, who stands just one match away from becoming just the third man in tennis history to hold all four Grand Slam titles at the same time.

He should know as he has been twice in that position himself in 2006 and 2007, only to fall to Nadal's claycourt prowess at Roland Garros on both occasions.

"Maybe luck will be on his side again," he said of Djokovic.

"Novak therefore will have more pressure, I think, which is quite normal, even though everybody thinks that Rafa is going to win.

"I think Novak has more pressure on him. To be in this situation you have to win three Grand Slams in a row again, which is more difficult."