Listen to the latest songs, only on JioSaavn.com
French Open 2012
Sports Home
Story ProgressBack to home

Former world No.1 Roger Federer has said that he could recover the top spot with a Grand Slam title this season. 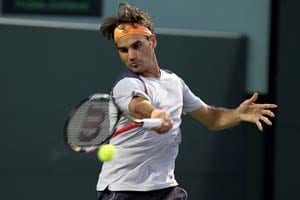 Former world No.1 Roger Federer has said that he could recover the top spot with a Grand Slam title this season.

The 30-year-old Swiss, coming back from a break to play at the Madrid Open, seems to be in good shape as he is preparing for the upcoming French Open and the following Wimbledon Championships.

"I feel good about my chances and about playing well the next few months. I'm happy that I am here and I'm really excited to be playing again. During this break I was looking ahead to what's to come, and I want to be fresh in my mind and fit for those big goals I have," he was quoted as saying by Xinhua.

The winner of 16 Grand Slam titles lost his top ranking to Rafael Nadal first in 2008 and then in 2010 after he recaptured it, insisted he could reach the top spot again.

"My focus is on my next match here Wednesday, but it is a dream for me to try to achieve that this year again and I will try to chase it as hard as I can and see if it is possible," he added.