The Williams car is better than it was at the same stage last year, their veteran Brazilian driver Rubens Barrichello said on Monday. 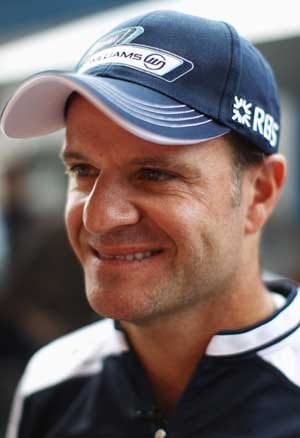 The Williams car is better than it was at the same stage last year, their veteran Brazilian driver Rubens Barrichello said on Monday.

The 38-year-old - winner of 11 Grand Prix - endured a difficult first season with the team last year finishing 10th with a total of 47 points as they ended up just sixth in the constructors championship.

However, Barrichello, who has a new team-mate in Venezuela's GP2 champion Pastor Maldonado, is confident that they can improve on that this year with their first test coming in the Australian Grand Prix in Melbourne on March 27.

"I think we are better on performance than last year. The car is a different animal though so there is a different way of treating it, but I quite like it," said Barrichello, who has driven for five other teams including Ferrari.

"How much faster it is, is very difficult to know, but the car feels better than last year to drive.

"This is my second year with the team and we are in much better shape than we were this time last year. Everything has been prepared well and the team is doing a really good job getting everything ready in time for Melbourne."

Barrichello, though, said that he could not make any definitive claims for how they would do, but he had clear aims for the campaign.

"There is still a question mark about where we stand. I know that we have improved but there are teams either side of us," said Barrichello, who has twice finished second in the driver's championship.

"I know how optimistic I am and I know how much I would love to say that we will do really well, but what I will say is that I want to be in Q3 and to score points, and I think that is achievable."

Comments
Topics mentioned in this article
Formula 1 Williams Honda Lewis Hamilton McLaren Rubens Barrichello Michael Schumacher Brawn Giancarlo Fisichella Sepang
Get the latest updates on ICC T20 Worldcup 2022 and CWG 2022 check out the Schedule, Live Score and Medals Tally. Like us on Facebook or follow us on Twitter for more sports updates. You can also download the NDTV Cricket app for Android or iOS.