Webber taking one season at a time

Red Bull driver Mark Webber said on Tuesday that his competitive juices were flowing as strong as ever, but that at his age he was only committing to one season at a time. 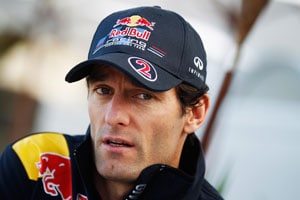 Red Bull driver Mark Webber said on Tuesday that his competitive juices were flowing as strong as ever, but that at his age he was only committing to one season at a time.

Ahead of the opening race of the year in Melbourne this week, he was confident his car would be competitive enough to challenge for the title again.

"We've prepared very well pre-season, we feel we've done all we can," he told AFP by telephone.

"The team has worked exceptionally hard on the back of an intense season last year and we now need to get racing and see how we perform."

The Australian, who won four times in 2010, added that he was more fired up than usual with the season starting in Melbourne after the opening Grand Prix was pulled from Bahrain due to civil unrest.

"I'm very lucky to have a home Grand Prix -- not all drivers get that. Of course the expectations are always higher for you to do well," he said.

"But I know the drill and I would love to be able to win. But it's not just having the first race in Melbourne that's exciting, it's getting the season started again.

"We're digging the foundations out here for the rest of the year."

Asked how long he could carry on as an elite driver with the clock ticking against him, he replied: "That question is never going to go away now that I'm in my mid-30s I guess.

"But I'm still very competitive - I get upset if I don't win. If the results are there and I remain competitive and I want to get out there, then I will continue.

"I've put a lot of effort into this season, but at this stage I'm just taking it one season at a time."

The gruelling event, which attracts celebrities as well as elite athletes to raise money for charity, ran from 2006-2008 before Webber broke his leg and funding dried up during the global economic crisis.

"It's back due to popular demand," he said of the December challenge, adding that despite requests to hold it in Western Australia and even Europe it would stay in Tasmania for the next three years.

"Tasmania is where we started and it's sensational that we're back."

Comments
Topics mentioned in this article
Formula 1 Sebastian Vettel Red Bull Mark Webber
Get the latest updates on ICC T20 Worldcup 2022 and CWG 2022 check out the Schedule, Live Score and Medals Tally. Like us on Facebook or follow us on Twitter for more sports updates. You can also download the NDTV Cricket app for Android or iOS.