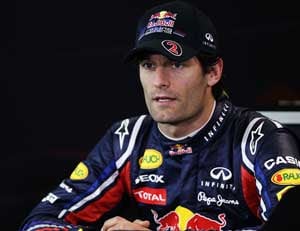 Webber had a quickest time of 1 minute, 26.831 seconds in cool conditions at an Albert Park circuit left slick by overnight rain, though all drivers used dry-weather tyres.

The Australian, in front of his home crowd, was a quarter of a second faster than teammate and reigning world champion Vettel as Red Bull continued on from its impressive championship year and form from winter testing.

Alonso was third in 1.27.749, while Mercedes lived up to its promise to challenge the top teams in Melbourne as Nico Rosberg finished fourth fastest in a session in which all drivers tried out the new adjustable rear wings allowed this season.

Michael Schumacher was eighth fastest in his Mercedes, while Filipe Massa posted a disappointing 11th after losing control of his Ferrari on several occasions.

Williams' Rubens Barrichello was fifth, and Sauber's Kamui Kobayashi posted the ninth-fastest time, a place ahead of Renault's Vitaly Petrov.

The session got off to a slow start when first man out - newly appointed Lotus test driver Karun Chandhok - spun on the third corner, damaging the front end. The incident prompted a suspension of practice and the Indian did not return to the track to post a time.

Hispania, which spent most of the night and early morning making modifications to its cars, also did not complete a lap, meaning its 2011 car had still not turned a wheel, with the team having used last year's car in preseason testing.

With the 107 per cent rule back in place this season - meaning cars that do not get within seven per cent of the pole time can not enter the race - Hispania is facing an uphill task to have its car up to speed.