We could have finished 1-2, says McLaren's Hamilton

"I'm not really sure what Jenson was struggling with, but we had the strength in the car and the ability this weekend," said the McLaren driver. 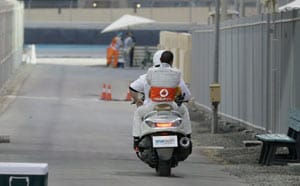 Lewis Hamilton said McLaren had a dominant car in the Abu Dhabi Grand Prix and would have delivered a one-two finish in Sunday's race if they had had a trouble-free weekend.

Instead, Hamilton led for 20 laps and then retired after a power failure while his fellow-Briton Jenson Button finished fourth.

Hamilton, who leaves McLaren for Mercedes next year, said: "I think this weekend we had the pace to get a one-two.

"I'm not really sure what Jenson was struggling with, but we had the strength in the car and the ability this weekend.

"I think in the last four or five races we've had something fail on the car even when we've finished the race. I hope luck will now swing our way."

He added: "I was in a really comfortable spot. It wasn't like I had Vettel or a Red Bull behind me that was massively quick.

"Kimi drove phenomenally and I'm very, very happy for him, but I was comfortably in the lead and the car was just beautiful to drive.

"I was cruising and I was still pulling away."

Despite his disappointment, Hamilton said he would leave Abu Dhabi happy with his performance.

"It was still a good weekend for me. I really enjoyed it," he said.

"At the time it felt fantastic in the car. We have a couple of other opportunities. Next time -- let's see. "

He watched the race, he said, after his retirement.

He added: "It's just incredible how Sebastian came up from the pitlane. He's got to be the luckiest person in Formula One."