We are eyeing a top-five finish next season, says Sergio Perez

Sergio Perez completed his move to Force India on Thursday and will be joining Nico Hulkenberg, who in turn is rejoining the Formula One team after a season with Sauber. 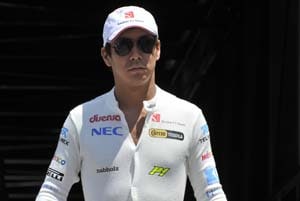 New Sahara Force India driver Sergio Perez is excited to be a part of a "young and hungry" team and said he along with partner Nico Hulkenburg will look to finish in top-five next season.

"I am really looking forward to next year. We have a strong line-up and we would look to bring the team forward and show we are a strong opponent," Perez told reporters in a tele-conference.

"I think a good finish for Force India next season would be a top 5 finish. We are two competitive and young drivers. We both have a lot to prove. We are a very strong and hungry team. I expect ourselves to finish in top 5 and I'm looking forward to a very big challenge," he added.

The Mexican driver completed his move to Force India on Thursday and will be joining Nico, who in turn is rejoining the Formula One team after a season with Sauber.

Perez was hired to replace Lewis Hamilton in McLaren but within a year, the 23-year-old driver was sacked and replaced by Kevin Magnussen after he picked up just 35 points during 2013.

"It was probably the worst possible year in McLaren. It was a competitive task and I could not improve myself in a top team. I believe one day I will have my chance," he said.

"I was informed by McLaren very late. So ya, there was a bit of uncertainty but I had few offers and I am glad it worked out well at last.

"Force India was my first choice and I am very much delighted to be a part of a young and hungry team like Force India. We have to dream big and set targets. The team is doing well and I am looking forward to do a good job," Perez added.

Asked about the new rule changes for the next season, Perez said: "It will make it a level playing field. It will be a close field. Sebastian (Vettel) will be a series contender for sure, no doubt about it. Let's see how things pan out but he will be a big player."

In a new rule change, Formula One has decided to award double points for the last race of the season in Abu Dhabi and Perez said it will make the race more challenging.

India will not be hosting a race in the next season and Perez said he is disappointed.

"I am disappointed but I really hope it comes back in 2015," Perez, who earned his highest point -- 10 points --finishing fifth in India Open Grand Prix in October this year.

Comments
Topics mentioned in this article
Formula 1 Nico Hulkenberg Giancarlo Fisichella Michael Schumacher Lewis Hamilton Sepang Honda Brawn McLaren Sauber
Get the latest Cricket news, check out the India cricket schedule, Cricket live score . Like us on Facebook or follow us on Twitter for more sports updates. You can also download the NDTV Cricket app for Android or iOS.