Valtteri Bottas bounced back to top the times ahead of his returning Mercedes team-mate Lewis Hamilton, in Friday's busy second free practice for the Abu Dhabi Grand Prix. 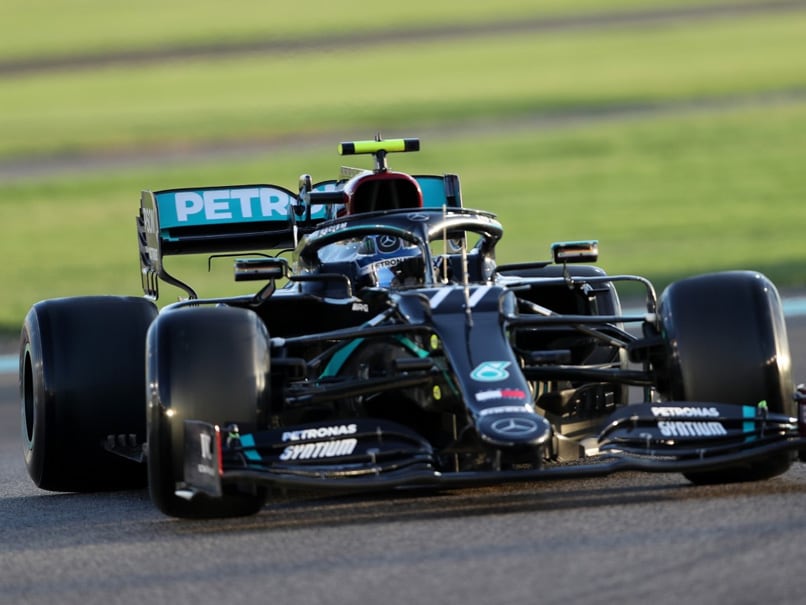 For Valtteri Bottas, it was a return to his familiar role as 'fastest on Friday'.© AFP

Valtteri Bottas bounced back to top the times ahead of his returning Mercedes team-mate and seven-time champion Lewis Hamilton, in Friday's busy second free practice for the Abu Dhabi Grand Prix. The Finn, embarrassed by the superior pace of Hamilton's stand-in George Russell, 'borrowed' from Williams, at last weekend's Sakhir Grand Prix, reacted with a determined showing at the Yas Marina Circuit. Bottas clocked a best lap in 1 min 36.276sec to outpace Hamilton, back after a bout of Covid-19 that forced him to miss an F1 race for the first time, by 0.203 seconds. For Bottas, it was a return to his familiar role as 'fastest on Friday'. Max Verstappen was third for Red Bull, seven-tenths adrift, at the end of a session that began and finished with tyre-testing, and was also interrupted by a red-flag period after Kimi Raikkonen's Alfa Romeo's Ferrari engine burst into flames.

Daniel Ricciardo was ninth for Renault ahead of Lance Stroll in the second Racing Point while Russell, last weekend's 'heartbreak hero', ended the session in the Williams pit after power problems.

After warm, dry and sunlit day, the second 'twilight' session began in similar conditions as the sun went down, the drivers ventured out to test Pirelli's latest prototype tyres on which everyone had to complete eight timed laps.

Initially, the two Mercedes men were fastest by a full second before Hamilton was called in for a steering wheel swap. The testing over, he resumed on mediums and went top in 1:36.479. Bottas then beat him by two-tenths.

When they switched to softs, Hamilton's first flying lap - in 1:36.097 - was deleted for running wide at Turn 21. Bottas' lap ended prematurely with a twitchy exit from Turn One where Gasly spun.

With 38 minutes remaining, it was teams in order with the two Mercedes ahead of the two Red Bulls and Racing Point's Sergio Perez, who will start Sunday's race from the back of the grid after collecting a penalty for taking a new engine.

At the sharp end, Verstappen showed his pace with the fastest first sector time before backing off when he caught Perez on a long run. His next lap was deleted for exceeding track limits at Turn 21. He stayed third, one-tenth down on the 'black arrows'.

In the closing minutes, two cars betrayed the age of their engines with George Russell's power-unit issuing smoke and then Kimi Raikkonen's bursting into flames.

The Briton managed to nurse his Williams to the pits, but the 41-year-old Finn pulled up at Turn Seven where he took a marshal's extinguisher to put out the fire.

The session was red flagged with 17 minutes remaining. After ten, the action resumed with Hamilton recovering from loss of gears in the pit-lane to re-start and re-join for a final fling.

Max Verstappen
Get the latest updates on IPL 2021, check out the IPL 2021 Schedule and Indian Premier League Live Score . Like us on Facebook or follow us on Twitter for more sports updates. You can also download the NDTV Cricket app for Android or iOS.