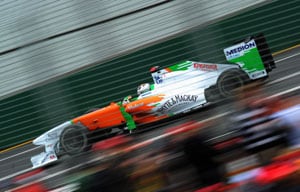 Sutil and di Resta had finished outside the points bracket at 11th and 12th respectively but they were elevated to the ninth and 10th spot after the exclusion of Sauber pair of Kamui Kobayashi and Mexican Sergio Perez for breaching technical regulations.

FIA stewards said that Kobayashi, who finished eighth and Perez, in seventh, were found to have breached technical regulations relating to the uppermost rear wing of their cars and will not get any points from the race.

Both Sutil and di Resta made a good start to the race, running in 10th and 12th respectively by the end of lap one. Di Resta was the first to pit for a set of new option tyres on lap 14 while Sutil's first stop came on lap 16.

For the team's second pit stops, Sutil came in for prime tyres on lap 37 and di Resta for new primes on lap 36. The pair then ran consistently in 11th and 12th, maintaining their positions until the chequered flag.