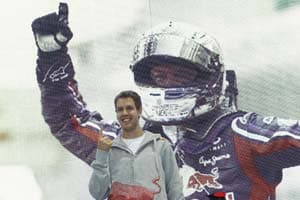 British Grand Prix great Stirling Moss has condemned the booing of reigning Formula One champion Sebastian Vettel that has accompanied the German's victories.

Three-times world champion Vettel is on course for a fourth F1 title but the frequency of his victories has become boring for some Grand Prix fans.

But the 84-year-old Moss, widely regarded as the greatest driver never to win the world title, said Vettel was a racer of the highest-class who deserved far more respect.

"Why do they do it? Because he keeps winning? He can't help that. He is a nice bloke. Sebastian Vettel is a jolly nice bloke," Moss added.

Moss said the 26-year-old German's dominance -- Vettel is currently 60 points clear at the top of the drivers' championship standings -- was similar to that achieved by Argentina's Juan Manuel Fangio, the man who denied the Briton the world title on several occasions.

"For a man to be that much ahead every time, every race, whatever the circuit, whatever the conditions," Moss said. "Vettel is just in a class of his own, really. As was Fangio. As was (Ayrton) Senna."

Moss also said he had no problem with Vettel's decision to disregard Red Bull's team orders in Malaysia this year and overtake Australia's Mark Webber to claim a controversial victory.

"Well, he's a racer what's wrong with that?" Moss said. "You're either a racer or you're a driver and there's a big bloody difference. Drivers are easy to find and racers aren't."

Comments
Topics mentioned in this article
Formula 1 Stirling Moss Sebastian Vettel Mark Webber Red Bull
Get the latest updates on ICC T20 Worldcup 2022 and CWG 2022 check out the Schedule, Live Score and Medals Tally. Like us on Facebook or follow us on Twitter for more sports updates. You can also download the NDTV Cricket app for Android or iOS.