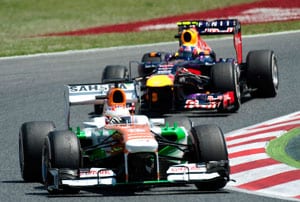 Starting from 10th place on the grid, the Scot raced brilliantly as he had an exciting tussle with pole sitter Nico Roseberg for the sixth place but eventually settled for seventh.

He had moved up to fifth at one stage while Sutil did well to not go down from his grid position after beginning the race at the 13th position.

Force India (32) are now leading McLaren (29) by three points in fifth place of the constructors standings. The British side was just one point behind Force India before this race.

Di Resta did well to finish ahead of Lewis Hamilton of McLaren, helping the side to increase the gap, though marginally.