Spanish GP: Lewis Hamilton moved on to 98 career wins after a surprise second change of tyres hoodwinked Red Bull to lift him 14 points clear of Max Verstappen in the drivers' standings. 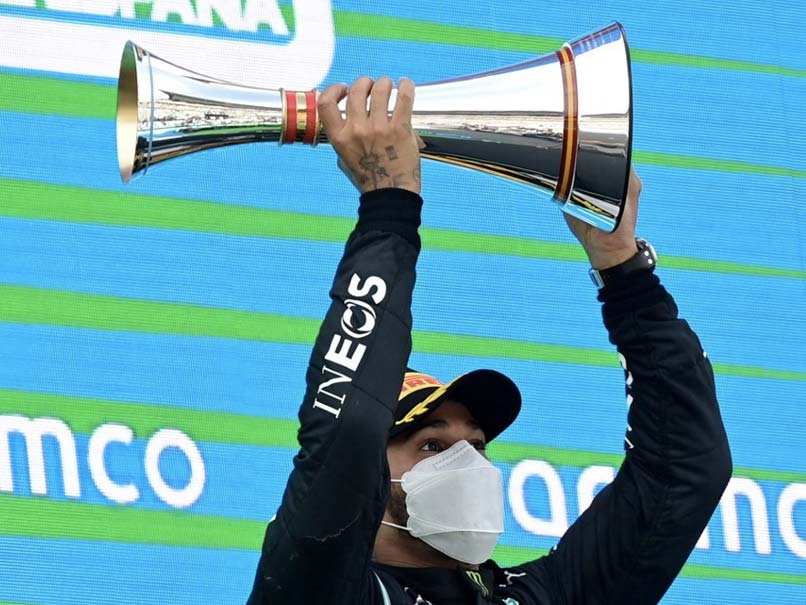 Lewis Hamilton claimed his fifth successive Spanish Grand Prix on Sunday ahead of Red Bull's Max Verstappen after a Mercedes pit-stop masterstroke. Hamilton moved on to 98 career wins after a surprise second change of tyres hoodwinked Red Bull to lift him 14 points clear of Verstappen in the drivers' standings. "It was a really great strategy by the team. What a day!" beamed Hamilton, who was quick to acknowledge the smattering of fans allowed in to watch, a rare occurence in the time of coronavirus.

"It is great to see. I saw a British flag out there which I haven't seen for a long, long time. I feel great after this. I feel like I could go again."

Hamilton had set off from pole for the 100th time but was beaten to the first corner by Verstappen, with Charles Leclerc for Ferrari dishing out the same treatment on Valtteri Bottas on turn two.

On lap eight Yuki Tsunoda's Sunday drive in Catalonia suffered a premature end when his AlphaTauri came to a grinding halt.

Verstappen held off Hamilton comfortably on the restart on lap 11, with Leclerc continuing to split the two Mercedes.

With a third of the race completed the first round of pit stops began, with all eyes on which of the front two with less than a second between them would blink first.

Verstappen it was who came in on lap 25, but the pit stop was slow by a couple of seconds in another minor but potentially critical error by the Red Bull title pretenders.

he Mercedes pit wall pulled Hamilton in for a lightning stop a few laps later as they pinned their hopes on fresher medium tyres making the difference towards the finish.

At the midway point Hamilton set the fastest lap to go less than two and a half seconds behind his Dutch rival. The gap was less than a second shortly after.

Hamilton, half a second off the lead, came into the pits for a second new set of mediums.

He reemerged with under 23sec to make up on Verstappen, who with tyre wear was in danger of becoming what he would describe afterwards as "a sitting duck" for the man in pursuit of a record eighth drivers' title.

Hamilton asked his pit wall: "How far have I got to catch up?"

There was a note of desperation on Red Bull's radio with Verstappen suggesting "I don't know how we are going to make it to the end".

Hamilton moved into second but there was no hint of team orders with Bottas forcing his teammate into full overtaking mode.

Ten laps to go and Hamilton had only three seconds to make up on Verstappen and on lap 60 he did it, surging past the Dutchman on turn one - Toto Wolff, his team boss, punching the air with delight as their masterstroke paid off.

Hamilton said he was in two minds as to whether to obey the order to come in.

"I was about to get a shot to get past him as I pitted. I was really conflicted - 'do I come in or ignore the call?'.

"I did what the team asked because there is a great trust between us. Remarkable job by everyone in this team. What a day."

Red Bull boss Christian Horner was magnanimous in defeat, saying: "In fairness, hats off to Mercedes and Lewis."

Verstappen said: "We're not where we want to be and we still need to push hard and catch up because at the moment we are a little bit slower. But compared to last year, it has been a jump for us."

Bottas took third in the second Mercedes with Leclerc's Ferrari in fourth and Sergio Perez in the second Red Bull completing the top five.

Formula One takes a breather next weekend before returning for the Monaco Grand Prix with Hamilton possibly having a tilt at his century of wins in Azerbaijan at the start of June.

Valtteri Bottas Catalunya Spanish Grand Prix
Get the latest updates on Fifa Worldcup 2022 and check out  Fifa World Cup Schedule, Stats and Live Cricket Score. Like us on Facebook or follow us on Twitter for more sports updates. You can also download the NDTV Cricket app for Android or iOS.