The 32-year-old Brazilian clocked his fastest lap of 1min 21.901sec in the final minutes of a closely-contested session run in dry, but gusty and cloudy conditions at the Circuit de Catalunya. 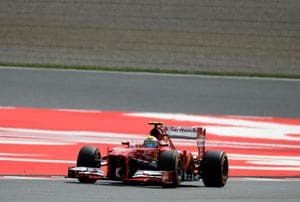 The 32-year-old Brazilian clocked his fastest lap of 1min 21.901sec in the final minutes of a closely-contested session run in dry, but gusty and cloudy conditions at the Circuit de Catalunya.

In front of Ferrari president Luca di Montezemolo, who arrived to watch the session from his team's pit wall, Massa's lap lifted him 0.006sec clear of nearest rival Finn Kimi Raikkonen of Lotus and ahead of third-placed Australian Mark Webber of Red Bull.

The top six were separated by 0.353 seconds - a clear signal that there is little to choose between them in such changing conditions with the teams all running variable fuel loads.

Hamilton's Mercedes team-mate German Nico Rosberg was 11th ahead of Briton Jenson Button, who continued to struggle in the under-pace McLaren, despite a raft of new parts on his car.

The top 11 were separated by less than a second in a session that gave little indication of true potential for Saturday afternoon's qualifying session.

"It looks very close," said Red Bull team chief Christian Horner. "But I must say Mark Webber loves it here and, for me, he is the king of the final sector.

"I am expecting a very strong performance from him, but Ferrari also look strong and Fernando Alonso is clearly responding to the crowd."

Comments
Topics mentioned in this article
Formula 1 Ferrari Kimi Raikkonen Felipe Massa Lewis Hamilton Brazilian Grand Prix Spanish Grand Prix Turkish Grand Prix
Get the latest updates on ICC T20 Worldcup 2022 and CWG 2022 check out the Schedule, Live Score and Medals Tally. Like us on Facebook or follow us on Twitter for more sports updates. You can also download the NDTV Cricket app for Android or iOS.